You may have heard, cause you’re so savvy and cultured, about the recent scientific research (there are way too many to keep up with) linking binge-watching to depression. Basically its saying that binge-watchers are a cult of of sad asses sitting on a couch made of their own tears, just simply because they’re human and enjoy watching Arrested Development all in one weekend. Forgive us, ok?

Once a month I host an event called Binge Brigade-the goal is to watch an entire franchise in a single sitting. Sometimes it’s painfully long (the Hellraiser franchise) other times it’s a lot more fun than anticipated (the Ernest series) but it’s always a challenge. I try to take binge-watching to the next level, and show people (and critics) that, hey, it can be fun. It’s not all depressing, you damn serious fuckers. One of the many Binge Brigades I’ve hosted that I’m going to spotlight (hold your hats) was the Scream franchise. With a running time of a little over 9 and a half hours, it’s the mixture of both worlds where it’s not really long but feels like a clichéd eternity but becomes so painful it’s fun.

Scream was the first binge we experienced and now all 4 films of the franchise are available on instant! Netflix has been working on having full franchises online and right now they’ve successfully added some pretty random ones such as Hellraiser and full trilogies like Beverly Hills Cop. They had the first three Screams for a while and recently struck a deal with Dimension to finish off their collection!

When Scream came out in 1996 it did what Cabin in the Woods did in recent years, it took everything we love about the horror genre and exploits them in a fun self-aware spoof that will forever change the course of horror. Only thing that is different is that CITW ended itself off in one movie without any chance of a sequel so it could leave on top. Wes Craven and Dimension went on to make a strong follow up the following year. It didn’t make as much money as the original but what’s the difference between $103M and $101M anyway? The third one dropped in 2000 with the tagline “The Third and Final chapter in the trilogy that made you laugh, and made you Scream.”

Basically, they’re telling me that if I’m on my butt too long it’s bad for my health. They’re absolutely right about that, so if you DO plan on doing so, make sure it’s a heart pumping ‘edge of your seat’ franchise… much like Scream.

2. It Ruins Your Good Mood

“You’re relaxing and releasing all these endorphins, but when you stop watching abruptly, you get sad because your brain has been feeling great for a long period of time.”

Honestly, Netflix is one of the best things to have ever happened to me. Sad? Probably. But don’t be telling me it “ruins my good mood” when I have people like Chandler Bing feeding me smiles off his sarcastic spoon, with just a click of a button. The way to think about it is that by finishing an entire season/franchise you’re accomplishing a goal. Positivity!

3. It Suppresses Your Problems

“If a person is experiencing underlying issues and suppressing them with binge-watching, it can negatively impact their health and ability to function.”

Look here. I got a lot of “adult” problems (not down there), so why is it bad to replace stupid struggles such as “Oh no my health care dropped me this month” with “Fuck yeah, Bill Murray.” Explain that to me. More Netflix, less problems. It’s simple logic here. Sure, the problems pile up, but so do seasons of Friends.

4. It Ruins Your Self-Esteem

People who binge watch TV can get caught up in their favorite characters and start to live vicariously through them instead of living their own dreams.”

I like me. I like me so much, I want to treat me. Sure it would be nice to treat myself with good alcohol every now and then, but that gets pricey and I’m living with roommates right now, so I’ll know they take a swig also. Netflix is affordable, and watching as many movies and shows on there as possible makes me more “cultured,” and gives more to talk about with the opposite sex.

5. It Makes You Slack On Personal Hygiene 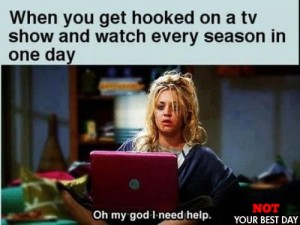 “Binge-watchers are twice as likely to skip showers than non-bingers.”

6. It Ruins Your Social Life

“Binge-watching can also really impact your social life in a negative way. I can totally attest to this. I turned down an invitation to go to a party with some friends last week so I could stay home and finish Orphan Black. This seems to be a common issues with binge-watchers because you get so hooked on what you’re watching that you’ll give up anything to find out what happens.”

Again, the Binge Brigades. They are made to bring people together. You don’t have to watch Netflix alone; heck, binge watching can even be a new Olympic game. You can just as easily call over your friends and tell them to bring over some snacks, booze, and other things you may need around the house (tooth brush, mayo) as you could forget to shower… See #5

7. It Causes You To Oversleep 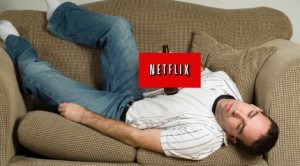 “Binge-watchers oversleep twice as much as those who don’t binge. Binge-watchers generally just start neglecting important things like eating, sleeping and being actual people.”

This is why we have the weekends. This is why the gods and goddesses (#YesAllWomen) gave us the damn weekend. To sleep in for when we couldn’t those weekdays spend watching at home. So, when did oversleeping on the WEEKEND (not the band, but that’d be cool) become such an issue?

8. It Makes You Sad When You Have Nothing Left To Watch

“Binge-watchers watch everything they want to watch and feel like they lost a friend when they’re done with a series. If you’re a binge-watcher, you’ll end up moving on to some weird show you didn’t even want to watch in the first place, but you’re out of pliable options. So tragic.”

I’m calling shenanigans on this. You tell me that after you’ve spent almost 10 hours watching Scream you’re not the least bit stoked to turn the channel or read a damn book! You feel relief! Pride that you finished something! The only sadness that is felt in the room is by the people who fell asleep with 20 minutes left in the final film… me.

But, hey, look up. Not at the ceiling, like love at the top of this site. What does that say? “A site to aid your Netflix addiction?” Yeah, that’s what we do for you, fucking aid you. When that week-long binge does come to an end, and you want something new to watch, come to us. We will find you something else to delve into. In the words of that one guy from Seattle, “Come as you are.”