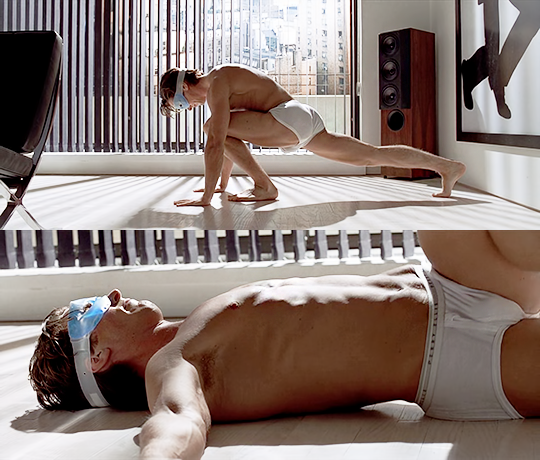 Spring is in the air, hormones are a flutter and Netflix is constantly streaming all the best eye candy. We all have our tastes-what we’re attracted to-and getting a glimpse is only a few steps away. Netflix is handy for those days you want to just enjoy the warm weather indoors and have your pick from the heroic manly men, well-groomed charmers, and twisted bad boys…and lots of gorgeous women, of course My personal preference differs from most people; since I spend most of my time watching horror films, I can’t help but notice that some actors playing murderous roles are also very attractive. It sounds kind of messed up, but it’s also hard to act like Michael C. Hall isn’t freaking gorgeous.

For those that are a little messed up like me, here are the five sexiest serial killers on Netflix that you can enjoy right now. I’ve included both men and women, so that there’s something for everyone, and also because of the limited number of good-looking murderers out there.

Look, I know he and the next person on this list are playing high schoolers, so it seems a little weird, but these actors were definitely of legal age for me to include them as adults. And how can I not? When I first saw Skeet Ulrich in Scream, it was love at first sight and it only continued after he was unmasked as part of the Ghostface killing duo. Sorry Matthew Lillard, but you just didn’t have what Billy had to offer, visually at least. Maybe you’re a bit gentler with a knife-I don’t know- but that’s not what’s being considered. I was kind of late on this one since today Christian Slater is kind of mocked and it’s sometimes hard to take him seriously. Regardless, he’s a total dreamboat in Heathers as he fulfills all of my high school fantasies: offing the kids that made my life a living hell. Even if you don’t agree with this mission, Heathers should still be seen by anyone who enjoys good writing and a fun plot.

I don’t even need to explain myself here… American Mary is the classy intelligent lady you always dreamed of getting with, depending on how

much you’re into back-alley surgery procedures. Though American Mary received a lot of mixed reviews, it’s not by any means terrible, and offers plenty of bloodshed and new ideas. Med student Mary who has med school financial issues, decides to find an alternative way to make money. Fortunately, she discovers a source to make money that doesn’t require her to remove her clothing, but instead modify body parts. Its got something of a weak ending that leaves viewers only wanting more, and I’m not sure I’d call Mary a serial killer…but Katharine Isabelle is at least deadly and definitely too hot to handle. Everyone knows Christina Ricci is a vampire who doesn’t age, only concluding that this woman will always be freaking beautiful. Getting to see her as the crazed Lizzie Borden in the Lifetime movieLizzie Borden Took an Ax was a unique treat. Honestly, these Lifetime movies are my guilty pleasure so I always find a way to enjoy these pieces of crap luckily, even when the modernized soundtrack throws me WAY off. Ricci makes this Lifetime movie work out and doesn’t at all half-ass her abilities.

American Psycho was just recently added to Netlflix - allowing me to add Christian Bale as the insane Patrick Bateman to this wonderful list of hot killer people. He’s creepy, unstable and takes good care of his body. What more could a horror fan ask for?