There are so many entertaining horror movies streaming on netflix that sometimes it’s incredibly hard to decide what to watch. Sometimes, you almost say forget it and watch a doc on something you have no interest in… Your life starts going the wrong direction after that. You start discussing out loud to strangers how you really miss Will & Grace until you spontaneously combust at a Starbucks… Don’t go down that road. Don’t become a brainless oaf walking the streets for “the greater good”… Here’s a list of five funtastic movies about rebelling against the mind melding conformism. Also, they’re just kick-ass flicks.

NIGHT OF THE CREEPS 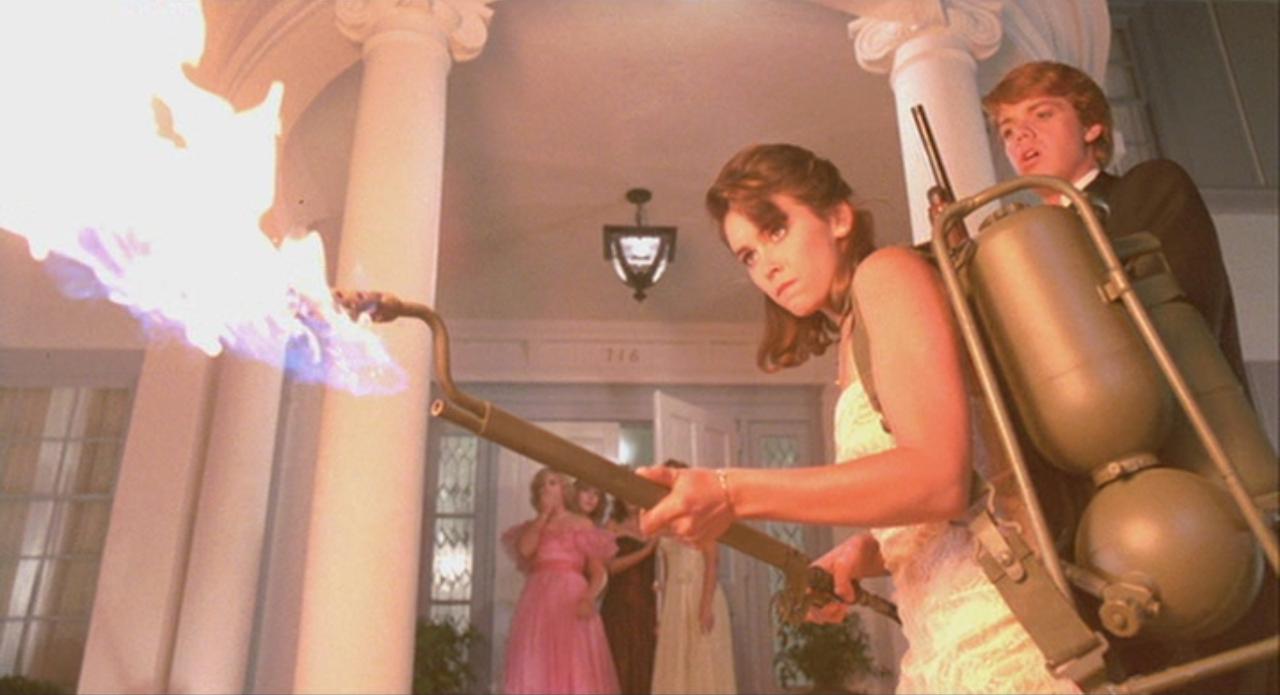 This is a HOLY-SHIT-why-didn’t-I-watch-this-sooner kind of movie. The day has finally come when  brain eating (dirty sperm-like) aliens are unleashed upon the world after 30 years of hibernation all hell breaks loose on a college campus. There was something about the 80’s that did horror right, where they actually cared about character development and having likable characters that have a reason to fight to survive. Even the b-story with the always abnormally alluring Tom Atkins is as bizarre as the main story. The trailer only scratches the surface on memorable one liners. You’d be doing your inner bloodlust a disservice by not watching this film THIS WEEKEND.

Good news is your dates are here… bad news is they’re dead.

Experimental director Larry Cohen has definitely earned his title of Master of Horror for his films like It’s Alive and this magnificent piece of horror… The Stuff! When a mind controlling snack food is mass-produced and on its way to being in the fridge of everyone in the world, who’s up to the challenge to stop it? A 12-year-old and the best damn former FBI agent turned industrial saboteur money can buy, that’s who! This movie is all over the charts ridiculous to the point where it becomes part of its charm, from the beginning when a man sticks his fingers in a curious white ooze bubbling out of the ground then without any hesitation sticks it right in his mouth… you know you’re going to love this movie. They used all practical effects that are right up there with John Carpenter and David Cronenberg, in a film that can only be described as Invasion of the Body Snatchers meets The Blob.

Gotta have more of THE STUFF.

A one location horror movie that I stumbled when I was in the mood for some violence, judging by the cover art that’s what I thought I’d be getting. Unfortunately that’s not what I got when I pressed play. Instead, what I got was one of the most simple and effective “zombie” films I’ve seen where they actually did something different with the idea and made it something that I’d never seen before. The director did an remarkable job making the premise something you try to tell your friends about but then have to stop yourself and say, “you simply have to check it out!”. Grant Mazzy is a morning radio DJ on air when his station breaks the story of a riot taking place just a few miles down the street, the cause of which is unknown. The entire film takes place inside the studio and you’re attention never drifts away from the action. You literally see NOTHING and experience EVERYTHING… you simply have to check it out! (see what I did there?)

THE HO- USE OF THE DEVIL Some people miss the days of 80’s horror and reminisce watching the same films over and over again, others like filmmaker Ti West make the 80’s movie they’d always dreamed about. With a knockout cast including vet Tom Noonan and personal favorite AJ Bowen, West crafts a perfect love letter to the art of a decade that seems to be long forgotten in today’s cinema. A college student strapped for cash takes a babysitting gig with a family that’s a bucket of red flags. West’s style of the “slow burn” can’t be any better displayed than in this suspenseful film. He utilizes shots that both delivers information to the viewer as well as make your skin crawl… right to your ball sack. Just a warning: If you watch this flick there’s a good chance you’re going to watch his next film The Innkeepers (LUCKY YOU) which is also available on Netflix.

You’re not the babysitter…

JOHN DIES AT THE END

This one’s a little different than the rest of the films on the list. I don’t consider this film to be a horror flick, but many of my friends and Netflix strongly disagree with me… I chose this one because it’s all about a little drug that changes your life forever… I’m talking about crack. No, it’s called soy sauce. Once you take it you can no longer see the way normal folks do. You’re cursed with the ability to see ghosts and alter worlds. It’s one of those films that no one thought was going to be good and judge it without seeing it. But, watch it and you’ll see how stupid those people are. The filmmakers had one day to shoot with Paul Giamatti and made sure to make it as effective of a cameo as possible. The visual effects are fairly shoddy but the film itself is so good that it makes up for it. 6 Monster Movies on Netflix To Tame The Beast Within

6 Monster Movies on Netflix To Tame The Beast Within

It’s Back To The Future Day - Best Time Travel Movies on Netflix!

20 Horror Movies on Netflix to Fuel Your Nightmares

Sneak Peek: What Titles Are Coming and Going Netflix in November 2015