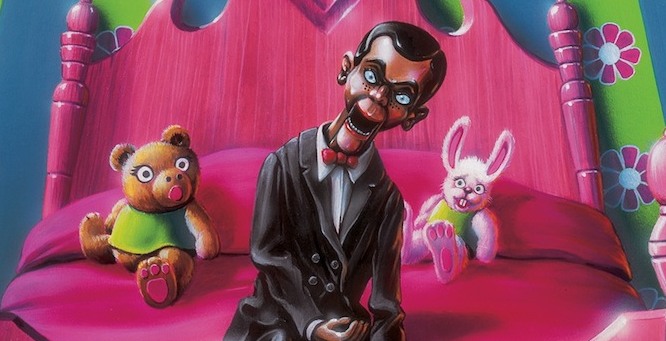 As many horror fans as there are out there, millions of folks who who have a devotion to dread, a craving for carnage, and a infatuation for fear. Unfortunately, they also don’t like the feeling of condoms and have brought on a mini bloodlust baby boom.

It’s unfair for parents to subject their kids to full on R-rated features like The Babadook or do what my parent did and see how far into The Exorcist I could get before leaving the room… luckily that isn’t on Netflix anymore so you don’t that option anymore. But you could use this October to introduce them to your favorite genre with films intended to fuel the imagination without giving them nightmares starring Freddy Krueger.

Netflix has you covered with some great titles to help get your young ones to fall in love with horror so one day they could be just like you, a socially awkward extravert with a killer t-shirt collection. Here’s 9 kid friendly horror titles on Netflix!

The Fly
You can’t let your child know what horror is without knowing the genre’s roots! American horror wouldn’t exist if it wasn’t for Vincent Price. A scientist mutates into a human fly after one accidentally flew into his transportation machine and switches their DNA. Luckily the kids won’t be too terrified but it’ll definitely be the perfect introduction to body horror and the art of mutation! Something that’ll keep them excited and begging for more.

Alvin and the Chipmunks Meet the Wolfman
Ok, this is one that I remember showing my cousins when I would babysit. It’s the kids version of Abbott and Costello… which is extremely family friendly… but those two aren’t on Netflix so they don’t exist in this scenario. When Alvin and the gang suspect their neighbor of suspicious activity, unfortunately they’re preoccupied when their shy brother who has been acting differently after being bitten by a mysterious dog. The writers had a lot of heart in this film and made sure to have equal parts family friendly horror and comedy… along with a few songs to keep your kids dancing.

Nightmare Before Christmas
It isn’t Halloween without Nightmare Before Christmas and if you haven’t shown this to your kids already you’re a bad parent and someone needs to call child services on you. I’m not saying take them to Hot Topic and deck them out with all the Jack Skellington gear they have… But this movie has a lot of great songs with eerie tones to get their little hearts pumping. Plus incredibly truly terrifying characters who they’ll fall in love with.

Goosebumps
Last year I did an article to see if Goosebumps still held up with todays youth, and R.L. Stein still has it after all these years! He’s still making feature films, some of which are on Netflix! If you’re a child of the 90s, the original Canadian television show’s theme song has been imprinted into your minds. The series has equal episodes creepy and crappy. Luckily when you’re a kid all you need is something scary before a commercial break and this show has PLENTY of that. Some images will be just what you need your kids to see to get them excited about horror… and other episodes will inform them of the harsh reality that not all horror is going to be good. It’s a hard fact of life but every little monster is going to have to learn it some day…

Monster Squad
When this movie popped up on Netflix I was blown away! The ultimate kids horror film where all the Universal monsters team up to take down the world and throw off the balance of good and evil. It’s hard to believe a kid wouldn’t find this movie to be amazing with memorable quotes like “Wolfman’s got nards”. The movie will instill a joy into them and let them know that if they like horror they’re not alone… maybe they’ll want to start a monster squad of their own.

The Addams Family
Show your kids the lighter side of horror and laugh along at the most macabre marital couple with a PG rating. It’s got unique characters inside the stereotypical storyline you’ve come to love from the 90s… A con artists plan to rob the Addams family blind by using an accomplice who claims to be their long lost Uncle Fester.

Courage The Cowardly Dog
I’m still not sure how this show made it on kids television. A truly terrifying cartoon that flipped the lid on terror on television. One family in the middle on nowhere is hit with everything from smiling barbers to cool cats… and they almost always want to murder Courage!

Cabinet of Dr. Caligari
Get your kids excited about the black and white films, usually that’ll be enough to get them scared… At a carnival in Germany, two friends bump into crazed Dr. Caligari. The men see Caligari showing off his somnambulist, Cesare, a hypnotized man who the doctor claims can see into the future. It’s weird, it’s wild, and it’s just what your kids need!

Big Ass Spider
Finally, I want to tell you that Big Ass Spider is the perfect Saturday morning movie for you and your kids. It’s gross and full of dialogue that’ll make you both crack a smile but unable to look away while you’re munching on your big bowl of cereal. When a spider starts growing at an alarming rate it’s up to a professional bug exterminator to do the job and save the city from sure destruction!