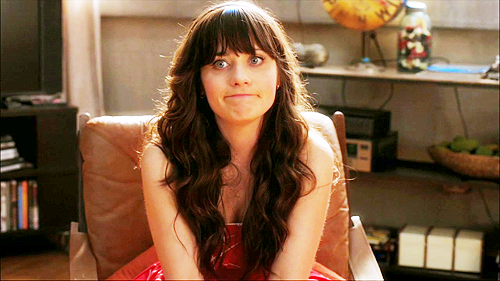 Fox’s New Girl brought out the weird, awkward, dorks in all of us. The show was one of the first to really express the excessive amount of awkward-yet-lovable moments everyone has; especially Jessica Day. The ‘Queen of Bangs’ Zooey Dechanel (Jessica Day) is utterly adorable yet a major dork throughout the series. Secretly we can all agree that we see more of Zooey’s personality than her character’s, but we’ll play along and declare Jessica Day as the adorkable sweetheart in our weird hearts.

When a breakup happens she makes it look pretty adorkable to be sipping wine in tears to TSwift jams.

It is kind of adorkable that she makes her glasses pretty useful.

No need for a caption.

With all her roommates being men she knows a thing or two about asking for help the adorkable way.

6. Jessica Day has the moves of a mouse and the sneakiness of a cat.

She is almost as cool as Mick Jagger without his moves.

7. At the end of the day, Jessica Day really does put the adorable in adorkable.

Nick and Jess could have their own list of how adorable and dorky they are together.

Jacqueline is a monotone talker who writes poetic criticism on the media and people, all from her unique worldview as a film expert who loathes Hollywood. She was born, raised and is still currently living in Los Angeles. She has come a very long way in her life as a survivor of Oceanic Flight 815. She decided to become a writer after realizing she didn’t just want to make not just her parents laugh, but everyone all over Narnia as well. Jacqueline spends a good chunk of her time stalking Zac Efron in the hopes of one day being able to become his ex-wife. She will never miss an episode of SNL air live and has been attending comic-con since ’08.