Girl friends are great. They can lend you their clothes, wigs, and tampons. They will lie that the new bitch your ex-lover is dating is ‘not even that cute,’ even when you are being mature enough to admit that she’s obviously pretty. Girls can keep a secret, which teaches you ‘Loyalty Above All’ because the last thing you’re going to do is betray a person who serves as your confessional priest. Girl friends will do embarrassing, sometimes illegal things to protect and/or catapult you, and they rarely ever want to hook up with you. But, best of all, girl friends will share giggle attacks with you, the likes of which will be forever unmatched by any man, and they will hold you with the love and tenderness of a sister whenever your heart hurts. From the Girly Girls, to the Guy’s Girls, to the Lone Wolves: each understands the value of their best girl friend. Here are the 9 best female friendships on Netflix.

What Cher and Dionne share-apart from being named after famous women who now do informercials and knowing what it’s like for everyone to be jealous of them-is a firm grasp of what it means to be a Top Notch Best Friend. These two champion and adore each other. And, what’s even better, they extended their coveted friendship to Tai, rounding out what is the original and much kinder Mean Girls. The Clueless Trio will be forever Rolliiiin Wit’ Da Homiiiiiies. Liz Lemon and Jenna Maroney became best friends back when they were amateur versions of their extreme personalities. In time, Liz became more secluded, Jenna more self-involved, and their friendship more vital. A grouchy girl like Lemon needs a friend as self-obsessed as Jenna so that her pessimistic thoughts are but passing moments that hold little weight. A delusional ditz like Maroney needs a sarcastic friend like Liz who is too intelligent to take anything she says or does seriously. But, mostly, they’re both so fucking hysterical together, I could (and have) watched them all day. 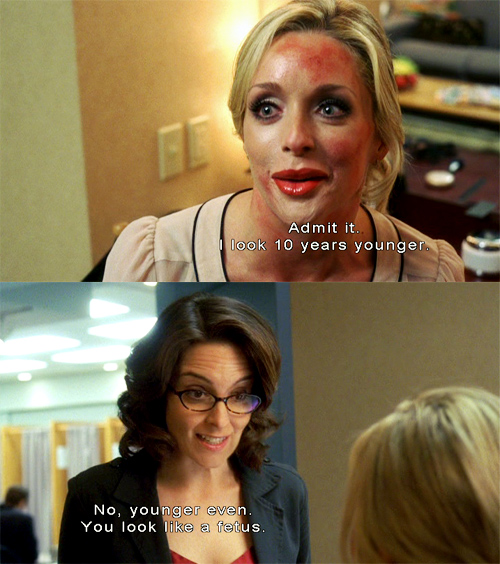 Everyone can quote Mean Girls because Mean Girls is the Bible. And, much like the O.G. Bible, it offers an abundance of quotes, stories and references to live by. But, amidst the sea of catchphrases and memorable characters, we oft pay little mind, if any, to the most beautiful love story in Mean Girls: Damian and Janis’ friendship with Cady. Janis and Damian took Cady in immediately, called her hot without being sarcastic and were always funny on purpose. More valuable still, they kept shit real: “You’re plastic. Cold, shiny, hard plastic…See, at least me and Regina George KNOW we’re mean. You try to act like you’re so innocent…You are a mean girl. You’re a bitch!!!”  Cady had that Janis-tell-off coming. Should we ever become hypocritical plastics, we should be so lucky as to have a brutally unfiltered friend like Janis to set us straight.

Could these three beeeeeeee any more adorable!?!? There isn’t a woman inhabiting God’s green Earth who hasn’t vocalized which of these characters they are most like. Some of us have even spent a considerable amount of time taking ‘Which Friends Character Are You?” quizzes hoping to get Pheobe instead of Rachel, for once. Not only are they each others’ best friends, Pheebs, Rachel and Monica are also the best friends of people all across the globe and spanning generations. There will NEVER be an end to their era!

Crossroads is on the more amateur end of things, but it stars Britney Spears so you can’t really ask for more since she is the very definition of a fun best friend. In it, BritBrit and her two bff’s buried a box of memories when they were kids, grew up to become super hot, went on a road trip and sang the whole time. Uhhhhh, hello, that’s the American Dream.

6. How I Met Your Mother

How I Met Your Mother is centered around Ted’s quest for love, and so has an ever-revolving door of women coming in and out of the series; it’s two staples being the independent Robin Sherbatsky and the bi-curious Lily Aldrin. Lily and Robin are each other’s sole source of female energy, which is ideal because neither cares for too much of it. Equally easy-going, immoral-ish, temperamental and good-hearted, they are the perfect match and never fail to offer each other support and/or a good talking to when the situation calls for it. Every Guy’s Girl needs a best friend like Robin and Lily. Parks & Rec is made up of exemplary female friendships. This all in thanks to the persistent optimist with a heart of gold, Leslie Knope. She is the most thoughtful, honest, inspiring and loyal best friend any human could ever ask for. While Leslie’s a pro at spreading her love, it is the beautiful Ann Perkins that can handle her odd and erratic ways best and, as such, holds the title of her overly-beloved Best Friend. Ann and Leslie push each other to be better, do better and love better. Plus, they say awesomely clever things to each other like ‘Gynecology before Guy-necology.’ 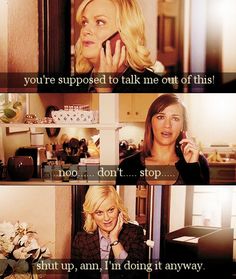 This pair of best friends is the most murder-y of the list in that they are the only ones who have committed murder. But, in their defense, they murdered someone they thought was getting in the way of their friendship - which makes Heavenly Creatures‘ Pauline and Juliet the most committed bff’s of the bunch. Is it a bit unsettling? Sure, if you wanna be a Negative Nancy about it. But, you know a little part of you wishes your   anyone loved you that much.

This friendship might seem like an odd choice considering one-half of the duo is a superficial sociopath, but Chloe’s lack of remorse for anything she ever does is not only part of her charm, it also helps make for the very type of best friend an overly careful and standard girl like June needs. Chloe liberates June from her typical existence while June provides Chloe with a female friend she can genuinely count on. We only got them for two seasons, but it was a fantastically hilarious run.