Unbreakable Kimmy Schmidt’s opening scene is exactly how Netflix’s trailer starts off- with a group of women dressed in Amish-like garments, holding hands and circling a Christmas tree like a group of wackos, believing the world has ended and they, and their dictator reverend leader, are the only living beings left in the world. A sharp pounding on the ceiling interrupts this Christmas celebration, and a team of rescuers barge in (Kimmy yells ‘Fire monsters!’ as her and her cult sisters huddle together in fear of these intruders), freeing the ladies and exposing them to the lively world they believed was doomed, equipped with a newscast team and a neighbor whose 30-second of news bliss has turned into a viral video music mock-up sensation. Kimmy Schmidt is finally free, and this tech-crazy world she believed gone is not welcoming her unexpected return the way she’d like. 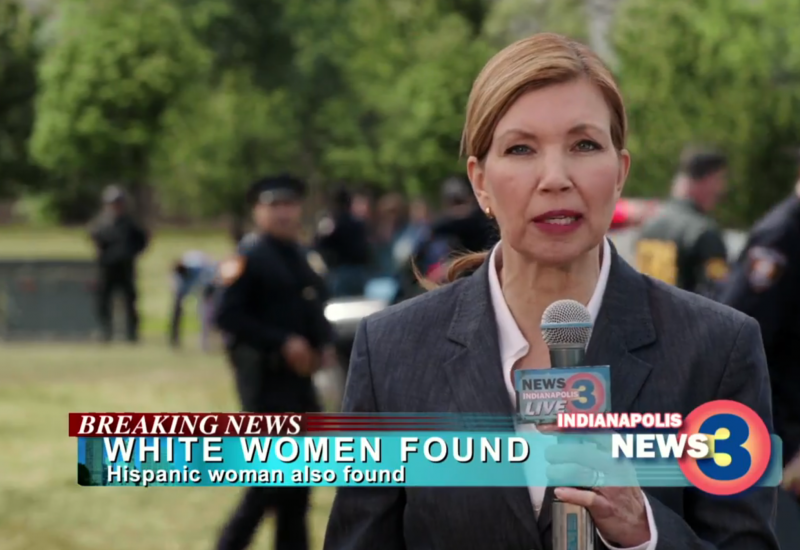 Kimmy and the Indiana Mole Women as they’ve horrendously been dubbed are interviewed by a morning news segment, recounting their experience-Some of them were manipulatively lured to this reverend’s home and some waited on them at a local restaurant and hopped on his truck to look at bunnies. Clearly, these women are out of placed and way behind on the times, so when asked what they’re going to do with their lives now (‘I’m your wife now right? I’m coming with you!’, one of them exclaims as she desperately tries to grab the show host.), Kimmy is hesitant without a plan.

Kimmy then decides to stay in New York (where the morning segment was filmed) taking money from the Indiana Mole Women fund people donated to. Buying a pair of new light-up sneakers and munching on a bag of sweets, Kimmy is optimistic her fresh start in New York will be a success. In the matter of maybe a few hours I would say, she finds an ad for a roommate (in a paper, a fucking newspaper!) and visits the apartment. The landlady is trying to evict a Broadway reject Iron Man impersonator Titus who is the flamboyant gay man Kimmy needs. They both agree she can move in once she’s secured a job (No pay stubs? Middle School education - No problem!), which Kimmy finds in, again, an unrealistic short amount of time- She will be a nanny to a rich kid she caught stealing candy, joining an insanely wealthy family and their insane issues. The mother Jacqueline is of course inconsiderate and self-absorbed (she throws a water bottle away when offering a water to Kimmy), and demands Kimmy plan a birthday party for her kid Tanner on a short notice. Kimmy fails to do so when she shows up to work the next day two hours late after having her backpack (“It’s a purple Jansport!”) containing her $13,00 donated funds robbed at a club. Hey, she was trying to celebrate, but this wasn’t a smart choicing, resulting in her dismissal from nanny duties.

After a moment of self-reflection, Kimmy grows a pair and decides to stay in New York.  Optimistic and living in a closet disguised as an office (“I have my own window!”) Kimmy is our smiling Wendy’s spokeswoman-looking heroine who will charm her way to the hearts of every New Yorker. Though unrealistically whimsical and convenient, episode one promises a good future for our Tina Fey character.

Jobless and optimistic, Kimmy returns to Jacqueline and the family’s brownstone to deliver a monologue of apologies and hope; being a nanny to Tanner promises income and the social activity she desperately needs. Jacqueline gives Kimmy a second chance at being a nanny and planning Tanner’s superhero party. Though it is her son’s birthday, Jacqueline’ real motive to throw this party is to seduce her husband who is flying back from London. Kimmy is then introduced to Jacqueline’s step-daughter Xanthippe she didn’t know existed, a modern day 15-year-old pain in the ass that has no problem recounting her times having sex on a Hawaii beach to her homewrecking 15-year-old friends in front of Kimmy. Xan doesn’t give a flying fuck, and threatens to “ruin Kimmy.”

Meanwhile, Kimmy’s good spirit and dreamer attitude rubs on Titus who decides to get rid of his rented Iron Man costume and use the security deposit for some new clothes, a first step in his journey to stardom. The costume storeowner, though, refuses to return the security deposit, claiming the suit is too damaged, even though Titus insists he treats the suit like he treats a beautiful woman (“I hardly touch it”). Meantime, back at Jacqueline’s rich home, the party is going on but Jacqueline receives the news that her husband will not be coming after all, and is instead returning to Japan. She then lashes at Kimmy for “ruining the party” and stomps to her room still wearing the stewardess costume she wore to reenact the first time her and her husband met (“He feel asleep on top of me that night.”) Kimmy, being good ole’ Kimmy, confronts Jacqueline and listens patiently as she admits her marriage is falling apart. This is probably the part where the audience feels sorry for her, but there’s not much to sympathize with when she still takes advantage of Kimmy’s goodness, making her spoon her.

Titus, meanwhile, teams up with a gang of costumed characters all demanding their security deposit refunds. Apparently, the costumes aren’t licensed (Iron Man is actually Robot Man), and the owner has no other choice than to return their deposits before they report the illegal activity to the same folks who shut down Titus’ empty Lion King one-man production (the people who served him with legal papers were the only people in the audience). Later, back in the apartment, Kimmy hears about Titus’ victory, while simultaneously venting about how she needs to quit the nanny gig cause the family is undoubtedly insane. That’s when Kimmy has an epiphany- Grabbing a “Babysitters Club” book (one of two of the only books she’s read) she realizes Xan made up the Hawaii sex story using character names and scenarios from the 12+ paperback. She uses this to blackmail Xan, forcing her to go back upstairs instead of the party the underage girl was headed to.

Episode two was a breath of fresh air and provided us with more insight on the characters that make up Kimmy’s confusing sunny world. Will Xan chew and spit Kimmy out as she said she would? Will Titus make it to Broadway, or any production at all? We’ll find out as we continue recapping Unbreakable Kimmy Schmidt the following days.