The show is moving at a snails pace but the family dynamic is so back and forth, flip flopping like a fish on dry land it almost perfectly resembles a real family struggle. If I had to pick an episode to watch first, I would still tell you to hold off and just read these reviews to get the gist. Nothing spectacular has really happened as of yet. Our own Jack Delaney covered episode 1 & 2 here, but if you’re a good subscriber and already knew that, please continue with my reviews of part 3 and part 4 of Bloodline.

The episode begins on what looks to be that same rainy night Ben was pulling Danny’s body in. Meg bursts through the front door and grabs a bottle of patron. The phone rings, it’s Danny… She literally flips shit! It’s all coming together.

Pappa Rayburn is still in the hospital and Meg finds herself in a sea of stress knowing that she never processed the latest edition of his will which cuts Danny out completely. She decides to take it out the same way most people in Florida relieve stress, whiskey and adultery. Ben is feeling the stress of Papa Rayburn missing indefinitely and asks Danny to stay to help at the inn. Even though everyone else is pissed about Ben going over their heads, they agree that it’d be best for the business.

Danny is going to be using the inn as a side job to his and his buddy Roy O’Bannon’s black gas tank business that seems to be booming at the moment. We’re not quite sure what’s in them tanks but I can guarantee it’s illegal and definitely not kosher. Otherwise, everything seems to be going great at the Rayburn Inn with Danny taking over. He’s good with the guests, hosting scuba lessons, picking out curtains! His only complaint is his paycheck isn’t fat enough.

Papa Rayburn finally wakes up from his coma and before the rest of the family gets there, Meg stops by to make sure cutting Danny out of the will is what he wants, but he’s unfortunately not “of sound body and mind”… he confuses Meg for a woman named Sarah. The look on Meg’s face alone lets us know that this sin’t just a random name. Sarah is a somebody.

The family decides to get a reel of old home tapes to help jog their father’s memory and hope that it all comes back to him, while watching the tapes they stumble upon Sarah’s birthday, she was the oldest daughter and clearly their father’s favorite Rayburn. Suddenly, that empty face Meg gave makes sense.

The episode ends on another classic Netflix cliffhanger. A flash forward to Meg freaking out over getting a call from Danny’s phone with what looks to be a body in the trunk… she answers the phone to hear a voice say “what you do?” Yeah, you’ll be watching the next episode immediately, so get comfortable. 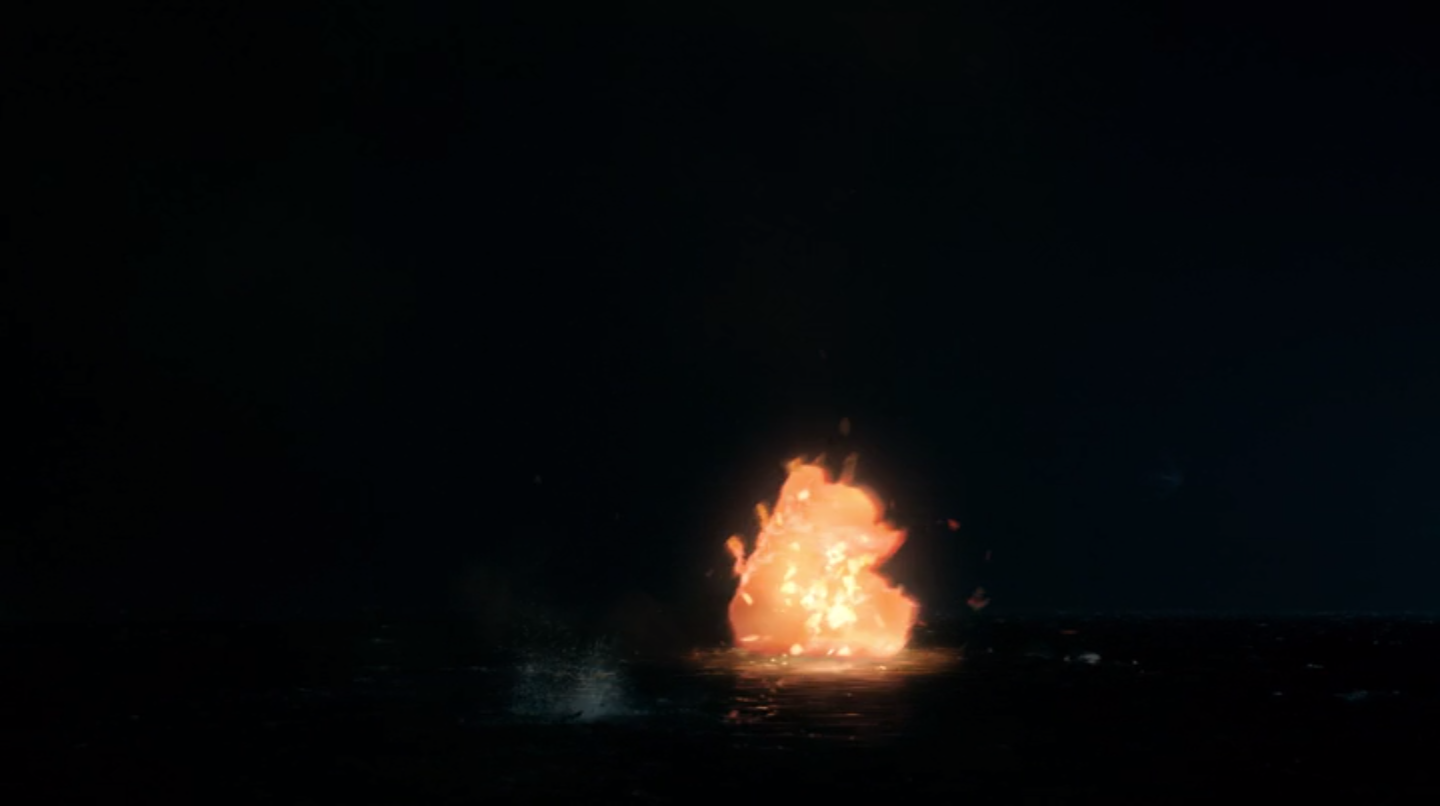 God, I’m not going to tire of this beautiful opening credit sequence. It shows the even the most gorgeous of coast lines can have filth was up on shore, then with a simple rain storm the problems can get covered up… but never really go away. Am I reading too into it? Too meta? I’ll just stick to the episode review at hand.

It fades in to another cold open we’ve become so accustom too. This time no one we know yet, they’re watching a boat full of immigrants drifting at sea. When all of a sudden the boat starts smoking and then blows up. These flash forwards and backwards are on the edge of being as frustrating as Breaking Bad season 2 was with their pink bear business. It happens that the boat that exploded is the boat that harbored the body that Ben found in the water days earlier. He starts putting the pieces together and looking for leads.

In lighter news,Papa Rayburn is back to his old self, rocking the ukulele like it’s going out of style (even though it totally is). This episode really shows the master actor that is Sam Shepard. He plays the part of a post stroke victim incredibly well. He’s accepted the fact that Danny is there to stay and even more so, he’s ok with it. Everyone seems to be ok with it, even Sam who has been Anti-Danny since say one.

In even LIGHTER news the Rayburn sons Danny and Sam are rebuilding their father’s old truck… ok. Sam is doing it to block his mind from the imminent divorce that’s in his near future and Danny is doing it because, no one knows… it’s fuckin’ Danny. They get the clunker working and all the Rayburn boys go for a ride with their father behind the wheel. Danny and his father go solo for a beer and he offers Danny a hefty chunk of change to leave that night. No one wants Danny or his lisp to be in the Florida Keys.

Danny’s pissed that he’s been written out of the will and says he wants more because he’s entitled to it (for what? Being born to a family that is rich? Cool. I’ll tell you how that goes with my father dude). Papa Rayburn agrees to meet with him first thing tomorrow with a price and he’ll pay it. Too bad for Danny that Papa Rayburn dun croaked that morning! Passed away right there on the beach.

Now that Sam Shepard is dead, he’s available for any other roles Hollywood would like to throw at him. I don’t know… maybe Silver Linings Playbook 2: Meet the Fockers. He can play opposite DeNiro and we could have an OCD/Stoke battle of whits. It’ll be glorious.

Stay glued as we keep posting more reviews as the days go on.