I’m a product of the late 80s and grew up knowing Saturday was the day to catch all my stories. Power Rangers, Beetleborgs and Goosebumps (ALL ON NETFLIX) were on my list of things NEVER TO MISS because I wanted to be able to talk to the cool kids about something. R.L. Stein was like John Carpenter,  having the Goosebumps books hanging out of your backpack instantly made you more desireable on the playground! The show was shot in Canada but the fear was universal, it was aboot the coolest show on television.

Even though the show strayed off the path sometimes of the original book, I still found Goosebumps wicked scary and some days I was actually too scared to turn the light off to go to bed, yeah… I’m that kid. The twist endings, the terrible graphics and the incredibly poor special effects were all forgiven, because the heart of it was really what kids’ nightmares were made up of… Being at your aunt and uncle’s house alone when a doctor wants to turn you into a giant frog beast.

But now in this day and age our kids are growing up with things like The Walking Dead… The social impact of the two is the same, you’re not cool if you miss an episode, which makes me vastly unpopular because I stopped watching last season. Since the social impact is the same, I was really curious what impact it had on today’s kids in their souls. Did this Canadian horror show full of  terrible dialogue and poorly manicured eyebrows make the kids of today jump when a door closes too fast and they think a dummy is coming to get them?

I had my cousins Max (8) and Kay (6) watch some episodes that I too revisited to see if they found them scary, but most importantly, if they held up. Neither of them grew up with the books or had even read one… so I was very curious to see what they thought.

Piano Lessons Can Be Murder When Jerry and his family move into a new house, he finds a long abandoned piano. After deciding to take lessons, however, a ghost warns him that the music school he attends is not what it seems.

I started with this one because it’s got all the classic Goosebumps qualities, kid moves into a new home, creepy ghost for no reason and even a creepy janitor. When I was a kid this was scary for the fact that a creepy old man was trying to steal your hands… but now it’s scary because an old man keeps saying a little boy has “beautiful hands”…

Max was not impressed by the episode and couldn’t get past the fact that a kids show would have “murder” in the title, while Kay thought “the part where there was a ghost was creepy-because it was scary”. Greg and his friends break into an old warehouse, where they find an unusual camera. However, the photographs Greg takes with it seem to predict disaster, and he becomes convinced the camera is cursed.

Another classic episode for the fact that it’s a 10 on the crazy scale! Ryan Gosling stars in this episode and finds the cursed camera in a MAD SCIENTIST’S (dude in a lab coat wearing a mop as a wig) workshop! As cartoony as this episode is, it does have a positive message, if you steal… you keel (kill)!

Max thought this one was scary first: because the pictures the camera took were the future and that was kind of creepy. Kay thought that since it had this guy with goggles in it, it was pretty cool.

I didn’t really find this one very scary but I was totally thrown when I saw Ryan Gosling as a kid. I was also surprised to find out that my 9 year old cousin, Max… Huge Gosling fan, loves Blue Valentine… While 6 year old Kay is more of a Half Nelson and Drive kinda girl. 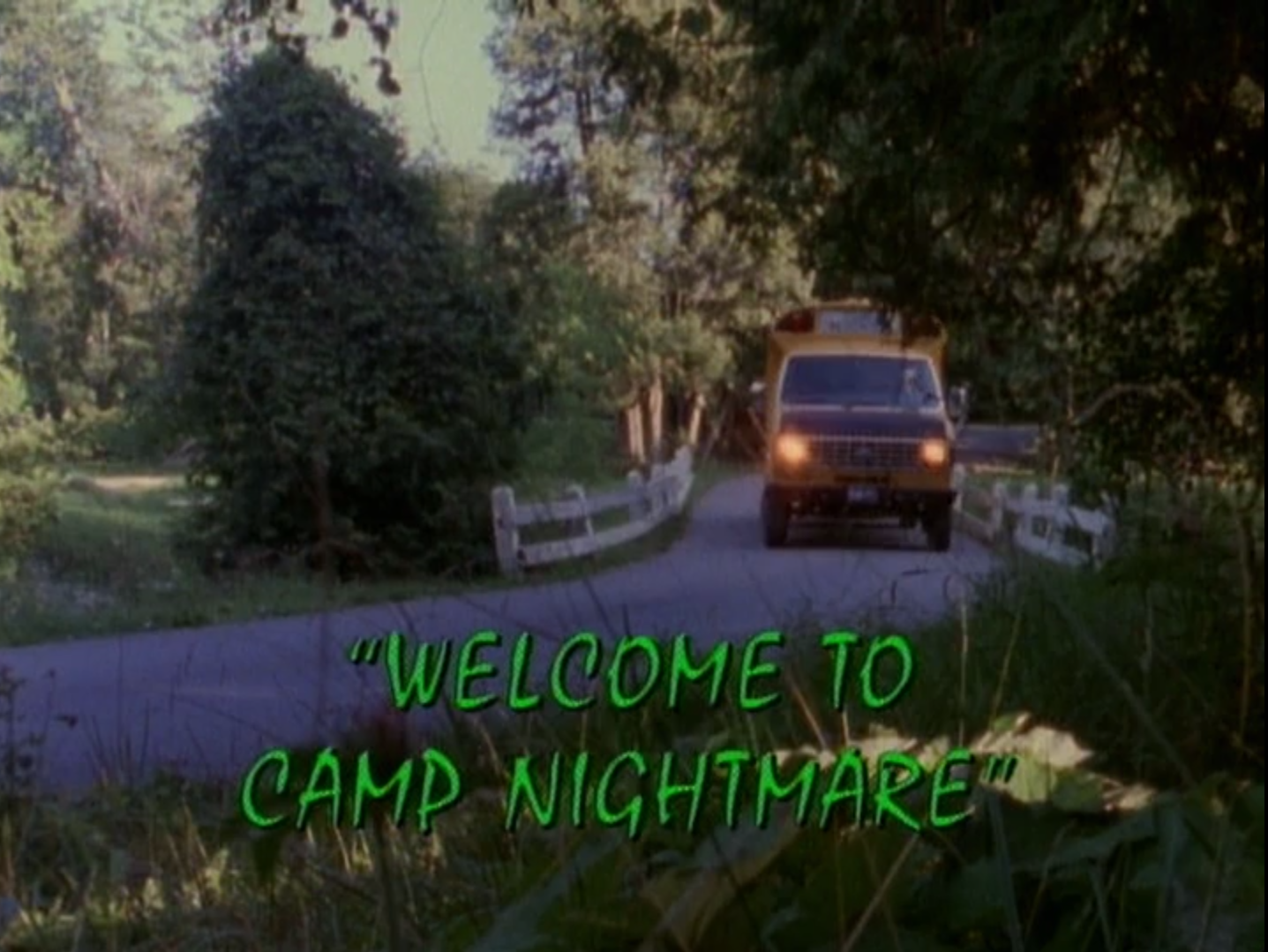 Billy and his fellow campers arrive at Camp Nightmoon, where, upon arrival, they encounter a strange creature. However, it would appear their nightmarish adventure is just beginning. Billy and the others are convinced that the creature, Sabre, is picking off the campers, but no-one believes them, while Uncle Al’s behavior becomes increasingly threatening.

This was one of my personal favorites as a kid and I was stoked that Max and Kay chose this one to watch. I remember going to sleepaway camps and always wishing they were going to be like Camp Nightmoon… but always ended up being fat camps. Nightmoon is the perfect camp, where all the counselors are one of three things: they’re either really creepy, really kind, or so kind it’s really creepy. The monster effects and suspense were on point and this is a great example of an awesome episode of Goosebumps. Unfortunately, today’s youth… NOT A FAN.

Max said, “it didn’t have a scary feel to it, it was just kind of creepy… it was kind of scary at the end because you think he’s gonna get eaten by the bear and you find out it’s a fake… I was relieved.” Kay was disappointed there were no monsters.

I get that. I think this episode plays better in the book because there’s only so much death and destruction you can show on a Saturday morning and this was one of the more brutal books.

Stay Out of the Basement Part 1&2 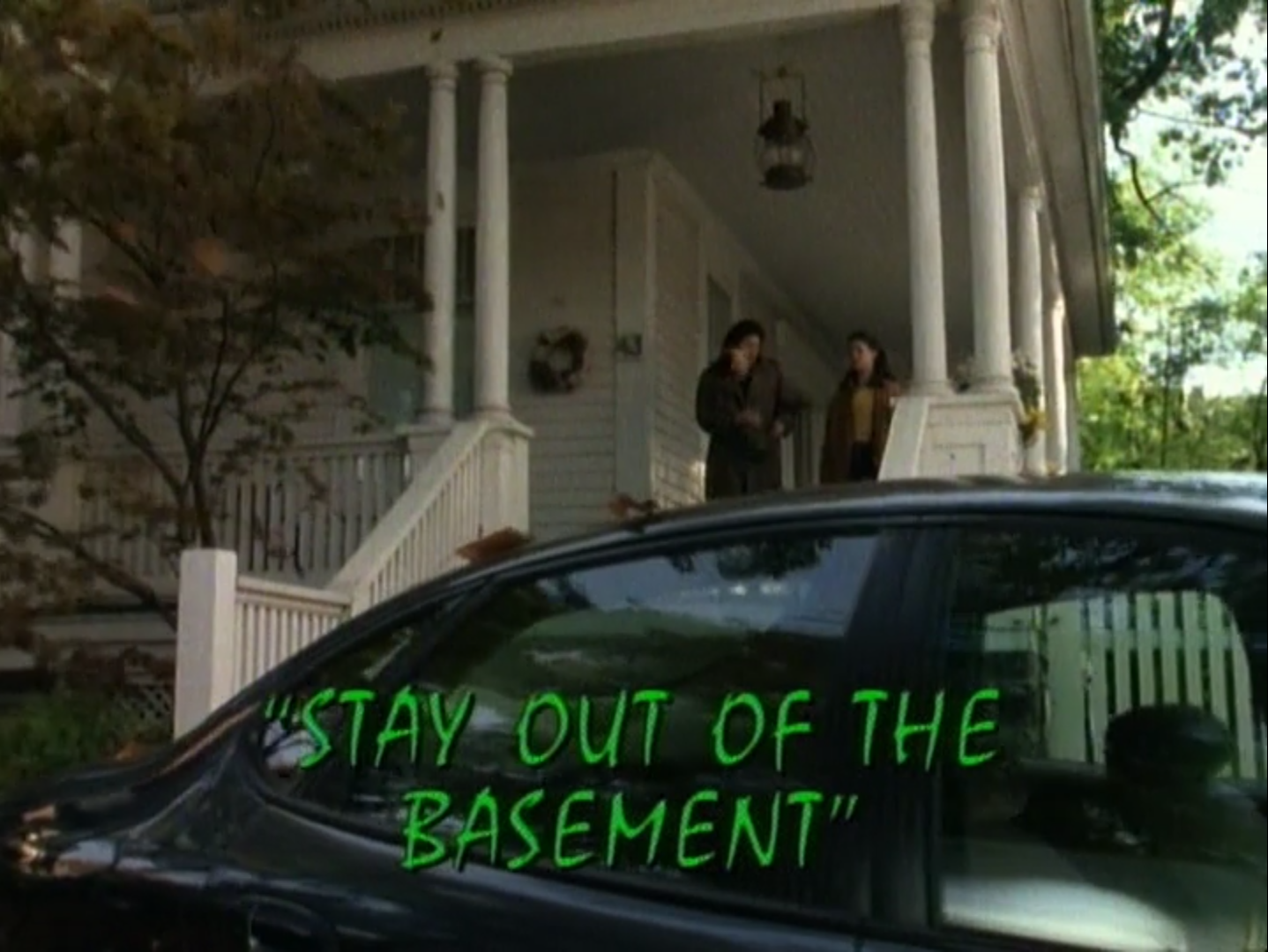 When her mother leaves town to visit a sick relative, Margaret’s concern for her father grows. She does not know what he is working on in the basement and cannot figure out why his behavior has changed.

As a grownup watching this, you see that Goosebumps basically took the symptoms of a meth head and replaced the word “meth head” with “scientist”

The father doesn’t want the kids to go near his stash… I mean lab! Lab! That’s the word!

I did a little research after viewing and found out the super sassy son went on to become a dancer in Rent and Chicago. #Calledit

The only thing that phased Max and Kay here was the plant with Margaret’s face growing out of it. Normally with episodes, you only know that you should be scared because we cut to commercial… but this was a very terrifying moment.

Also, we universally didn’t like the talking flowers at the end because they were more corny than creepy… I hate flowers. I stop and STOMP the roses now. I wasn’t a huge fan of this 2 part episode and if it wasn’t for the fact that I recognized one of the actors from the movie Pontypool I would have shut it off after part 1. This is basically my least favorite episode in history. It is in the opening credits of EVERY episode and because of that… I had to make the kids watch it to see if it was just me… or if this is just a genuinely terrible episode! The kids find TANNING LOTION that turns them into DOGS… in a neighborhood where this seems to happen ALL THE TIME! I don’t know. Let’s see what my young consultants have to say.

Max reports, “no monsters no good”. Kathryn says that its not even scary, it’s just weird

I’m not crazy! It’s just a crappy episode! Masterful reporting in my opinion.

Unfortunately, the show will never be as good as I remember and whenever I re-watch it’ll be out of nostalgia. Even though the majority of the episodes left the kids unphased, I was extremely pleased to learn from their mother that Max requested her to read the Goosebumps books to him before bed (instead of rejected Ryan Gosling screenplays). Not only did he want to read the books, he was getting scared by them! If anything, this experiment proves one thing: the imagination will always be mightier than the Canadian Broadcasting Company!

The fact that the books not only hold up but are still coveted in playgrounds everywhere warms my heart. I realize that when I have a kid, I know he’ll be the coolest kid in school. He’ll have a full collection of the series.  Thank you to Max, Kay, and their parents for allowing me to use you to make unemployment more exciting.