You know that snarky sentence almost every critic has written at least once in their art bashing career? The famous, “I watched this so you don’t have to,” line that is a condescending attempt to make readers feel as if they did them a favor? Well, I don’t mean to make myself into a movie saint of sorts, taking on the films you shouldn’t watch, but, yes you guys, I watched this (or more like these) so you wouldn’t have to. And I’m not saying this because they were generally bad films; I’m saying I did you a favor by watching all three version of the Disappearance of Eleanor Rigby because it is a damn unnecessary commitment. Three fucking versions of the same film…for you. (Queue appreciative applause) All three versions of last year’s indie experiment starring Jessica Chastain and James McAvoy The Disappearance of Eleanor Rigby were unexpectedly released this week on Netflix. And by the three versions, I mean the Him, Herand Them versions of this romantic drama that analyzes the disintegration of what once was a loving and devoted relationship.

Him is Conor’s (McAvoy) version of what happened, following what he remembers and what he has been up to since his wife Eleanor unexpectedly leaves him. Her follows Eleanor’s story, examining Eleanor’s reason for calling it quits; and of course Them is a combination of the two stories, tying together both versions carefully and elegantly. Unfortunately I watched all three versions, and the reason why I use the word unfortunately is because I could’ve been doing something else, like catching up on Twin Peaks season 2 (22 episodes!).

You don’t really need to watch both Him and Her if you’re going to watch Them. Them does a great job combining the two stories alone, that Him and Her almost seem like a waste of time.

“I’m going to watch Him first because he was the one broken up with; then Her cause she was the one who left, and then Them to see how both movies come together,” I show-offy proclaimed.

Genius. The order of which I’d watch the Eleanor Rigby was spot on- I’m pretty sure the filmmakers had intended for viewers to watch them in this order. High-five for me.

I regretted this as soon as I began watching Them. Though Him and Her did a great job diving into 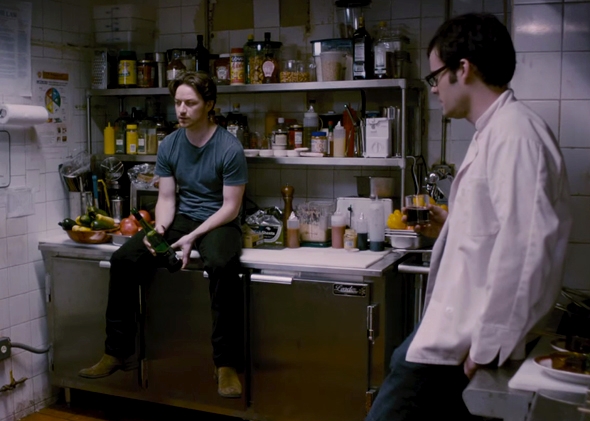 Eleanor and Conor’s separate experiences, Them morphs both films together so well that hardly anything is left out, making Them the only Eleanor Rigby you really need to watch. Actually, you seriously won’t miss much if you don’t watch the first two, but of course you’re welcome to. I’m pretty sure director Ned Benson would be delighted if you did. He would be ecstatic.

Eleanor and Conor are two fashionable well off 30-somethings residing in their trendy New York apartment. Conor is as restaurant owner who runs a hip joint with his lazy freeloading “chef” friend Stuart (Bill Hader being the worst employee imaginable). The restaurant to everyone’s dismay (and no one’s surprise) isn’t going too well- The Village Voice fairly deemed it as a “bar with indecent food,” which is the sentence to death for any New York business.

Conor however comes from a line of successful business owners- his dad (Ciarán Hinds) is apparently a restaurant hot shot, owning one of the most bourgeoisie restaurants in the city (“The Stones came here after a show,” Conor’s father nonchalantly says one night). Connor’s strained relationship with his father is clouded by stubbornness however; he repeatedly refuses his father’s help, even when the restaurant is standing on its last two limbs. When his wife Eleanor unsurprisingly leaves him in hopes to find a different version of herself, Connor mopes and makes bad decisions, as he tries to respect Eleanor’s decision (spoiler alert, he sucks at this). This is a pretty realistic portrayal of how most people deal with break-ups, however it nonetheless makes Connor seem like an asshole. He is pretentious and annoyingly clueless as he struggles with this bump in his marriage, therefore making Him not quite as enjoyable as Her or Them. If you had to rule out one of the versions, I recommend you rule out Him, cause Connor’s story is not that interesting, especially since sadly he was the one walked out on.

Because this is ultimately about the disappearance of Eleanor Rigby, Eleanor’s story is the more drawing of the two. Rigby’s sudden departure seems mysterious almost in Him, but when you watch Her and then Them her leaving makes absolute sense. After a failed suicide attempt, you discover that Eleanor is struggling to come to terms with a devastating loss Conor and her experienced earlier that year. Eleanor handles this traumatizing event (not going to spoil it for you) in an unhealthy but understandable manner. Conor on the other hand refuses to even speak about what happen, only moving forward because really, what else can one do? Though Eleanor and Connor were happy before, their union doesn’t seem to work anymore if both parties handle themselves differently during difficult times. They’re great being there for each other during the best of times, but the worst of times is a whole different story.

Eleanor goes back to school and meets professor Lillian Friedman (Viola Davis), a former colleague of Eleanor’s father and a slouchy yet blunt presence Eleanor is in desperate need of. Living back home with her parents and her sister Katy (Dawn from Teeth. I was surprised too) and Katy’s son, Eleanor attempts to heal slowly by being around her family and having no direction in life. When getting into a taxi after an almost one night stand encounter, the taxi driver asks if Eleanor has a destination. She responds with “Eventually,” which rings true to Eleanor’s current situation. She will eventually know what to do, whether that be with her husband or not.

There’s a lot of stalking in The Disappearance of Eleanor Rigby; though Eleanor begs Conor for space she still can’t fight the temptation to meet with him every now and then. Both characters proceed wit their lives being weighed down by what they really want, and that is for everything to be the way they used to. But like almost everything in life, sometimes recreating the past, though desirable, is almost impossible. We know what Eleanor and Connor are thinking and that is, “I really wish everything were okay.”

Ned Benson does a splendid job giving viewers a marriage up against the ultimate test. Keep in mind that Eleanor and Connor have only been together seven years, but they’re already experiencing a turmoil not many couples experience until well over decades of marriage. Though Him and Her are great ideas on paper, the commitment to watch all three films takes away from the actual story. Chastain and McAvoy’s outstanding performances do carry their character’s individual stories well, but watch Them if you don’t have the time or the attention span to watch three versions of the same story. If you do have the patience to endure this than you are a wonder of a person.