Brush up on the who’s who of the “Hollywood Blacklist” because it’s time for another installment of Classic Movie Monday, where I sift through Netflix’s classic section so you aren’t trapped in an endless scroll cycle on the Netflix homepage. This week I watched a film that I hadn’t seen since POSC 417 (shout out to Prof. Gianos at CSU Fullerton), The Day the Earth Stood Still (1951).

The science fiction film opens with an unidentified spaceship landing inside Washington D.C., right in front of the Washington Monument. After amassing a large crowd, out comes Klaatu (Michael Rennie), a humanoid male who proclaims that he and his companion Gort come in peace. Gort, played by Lock Martin, is a giant diaper-clad Oscar statue that can laser away all weapons with his eye beam. So that’s cool and not at all intimidating. Luckily Klaatu went to the same dialect coach Clark Gable so he sounds like a wealthy uncle you can’t help but trust. 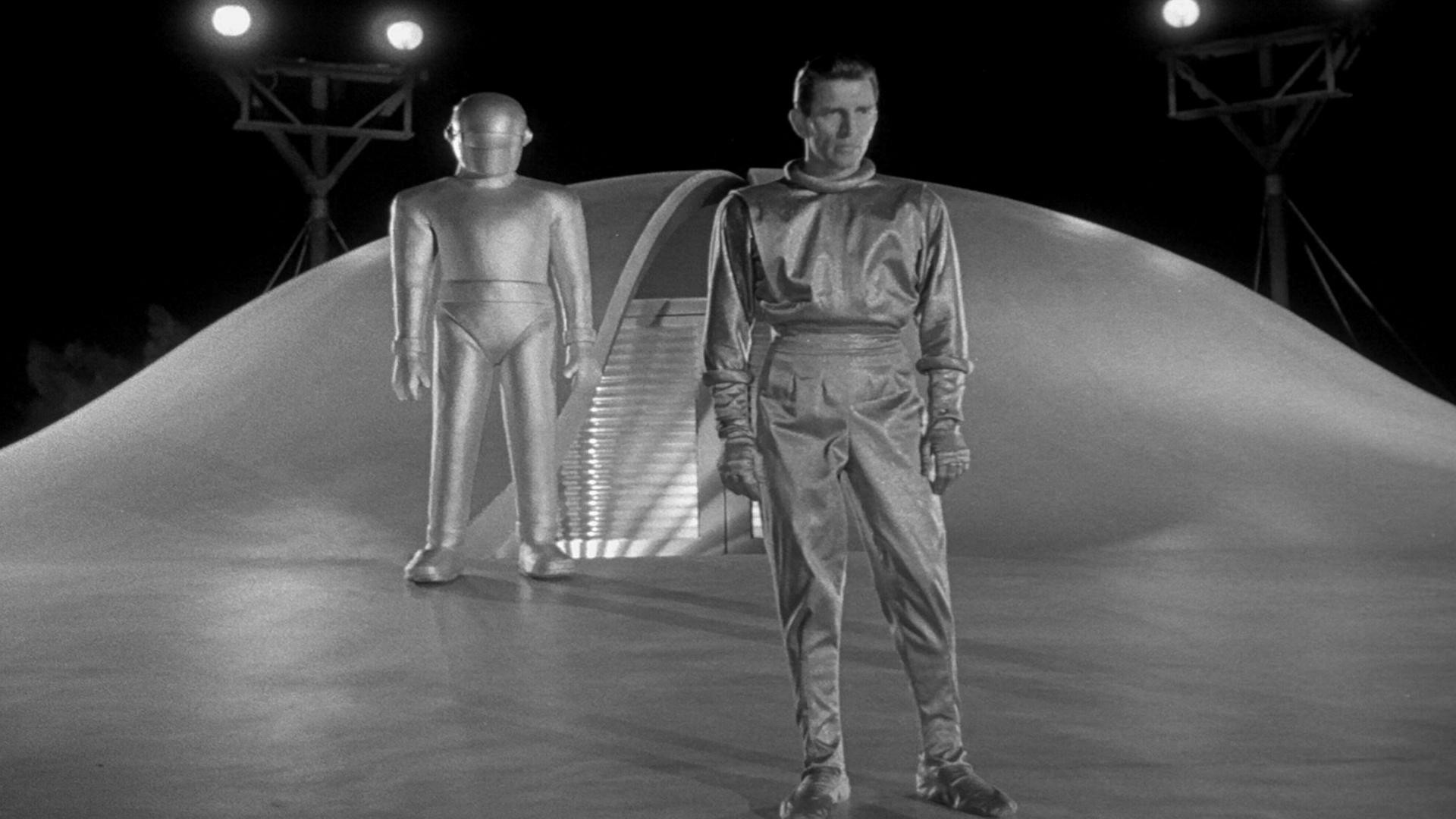 As Klaatu tries to make friends and urge political leaders to bring about world peace, Gort stands in front of the ship like a giant diapered bouncer waiting for instructions as the U.S. Army tries every method possible to break into his spaceship. The U.S. government wants Klaatu to stay put and under their careful eye while they conduct some tests and figure out if there is some sinister motive behind his visit. Instead of being held captive, Klaatu decides to escape out a window and hide in a boarding house under the name Carpenter. Here we meet our sympathetic human characters Helen Benson (Patricia Neal), her son Bobby (Billy Gray), and Helen’s boyfriend Tom Stephens (Hugh Marlowe). As the world around him goes into a panic over the mysterious spaceship and its inhabitants (are they really aliens or Russian spies?!) Klaatu begins his search for the greatest living person (spoiler, it’s Professor Jacob Barnhart played by Sam Jaffe) in an attempt to get him to inspire the people of Earth to join planets throughout the universe in peace. The film is an obvious response to the Cold War and warns Americans that if we continue on the path that 1951 was beginning to pave, we may as well doom the entire planet. The metaphors in this film are pretty heavy handed, and it’s no surprise that this film is a warning against the Cold War. It’s also no surprise that Klaatu is a Christ figure, his pseudonym is Carpenter for Christ’s sake (pun intended.) Without boring you with Professor Gianos’ lecture on the film, it’s a damn classic for a reason. It blends Americans’ fear of the Russians out-developing us in the space and arms races, mutual destruction, and the growing love for science fiction at the time. Plus if you’ve ever heard the iconic line “Klaatu barada nikto” (which should sound vaguely familiar if you’ve seen Army of Darkness) this is where it’s from.

Read this trivia instead of watching the dumb remake:

- Lock Martin was the doorman at Grauman’s Chinese Theater and was picked for Gort because of his height.

- The film utilized famous broadcast journalists of the time to play themselves to make the film feel more real to viewers.
- The Army wanted nothing to do with the film after they read the script (presumably due to the fact that it’s pretty anti-military), so The National Guard filled in for them.