So what if their Spielberg collection consists of Amistad and Hook? Who cares if the only Altman films they have are Three Women and Ready to Wear? What Netflix does have in abundance is garbage. It’s time to surrender and celebrate it. This isn’t so bad it’s good… this is so bad it’s Netflix.

For the Love of It is an uber-wacky, pseudo-screwball chase movie complete with cartoon sound effects. It plays like a land-locked, two-hour Love Boat special sans laugh track. In fact, the only reason Love of it can be considered an actual movie is the lack of a laugh track. I usually hate laugh tracks, but damn, we really needed some kind of indication that comedy was occurring during the proceedings. Love of It packs in more 70’s TV celebrities than thought humanly possible, and does it with the finesse of a roller-skating walrus. Instead of one hot hunk we have three, instead of one villain we have four, etc. Love of It may be a bargain basement It’s a Mad, Mad, Mad, Mad World but it definitely rivals Mad in terms of complete unfunniness. Love of It is a TV product for adults that treats its audience like toddlers. What pre-cable audiences once had to put up with never ceases to amaze me. When a star as big as Barbie Benton shows up for a mere two minutes to get things rolling, you know you’re in for a night of too many stars. The thing about old TV M.O.W.’s is that, although they may be micro-budgeted, there’s still going to be huge stars involved since their are untold millions of viewers that are guaranteed to watch. If it’s a network project, celebs will gladly fill tiny roles.

So anyhoo, The F.B.I., the C.I.A. and U.S. Army Intelligence are all after a stolen micro-chip that would give Russia power over Middle Eastern oil supplies if it landed in Soviet hands. Somehow, a pretty lady (Deborah Raffin) takes possession of the chip by accident and now she’s on the run from several idiots who are trying to kill her. There to help her out is love-struck med student, Jeff Conaway, and his two lunkheaded buddies, Adrian Zmed and Lawrence Hilton-Jacobs. That’s the plot, but you could really just label Love of It a coke-addled automotive tour of California, with stops in San Fran, Santa Barbara, Laguna Beach and La Jolla.

Let’s go to the So Bad It’s Bullet Points!™

It’s a shame Jeff Conaway gets second billing in Love of It, since he has enough wattage to play all 238 characters. Whether he was wigging out on substances at the time or not, Conaway is a whirling dervish of theatrical energy. This style suited him in Grease, where Conaway gave Travolta a run for his money in terms of charisma. In Love of It, however, Conaway is working way too hard for his money and committing too much to his dumb role. The only guy who can match Conaway’s mugging prowess is Adrian Zmed, who ended up being the “Travolta” figure in Grease II. To cool down this made-for-Broadway two-some, we have smooth operator, Lawrence (Freddy Boom-Boom Washington) Hilton-Jacobs, perhaps the only Sweathog other than Travolta to have a career in Hollywood, post-Kotter. After all, he did play Papa Joe Jackson in the TV bio-pic of the Jacksons that runs on VH1 all day, every day. Alas, the film hangs Zmed and Hilton-Jacobs out to dry, since they offer nothing to the story and are just there to run behind our lovers. Poor Zmed is forced to be in scenes like this: First on the call sheet is M.O.W. veteran, Deborah Raffin, who remains completely sexless throughout and not nearly as feminine as Conaway. We are treated to Norman “Mr. Roper” Fell in drag, who, hands down, is the ugliest she-beast ever caught on film. It’s super-disorienting to hear Pat Morita speak in an american accent in Love of It. However, he does serve tea to Raffin at one point, so I can’t say his C.I.A. guy role was totally unprejudiced. 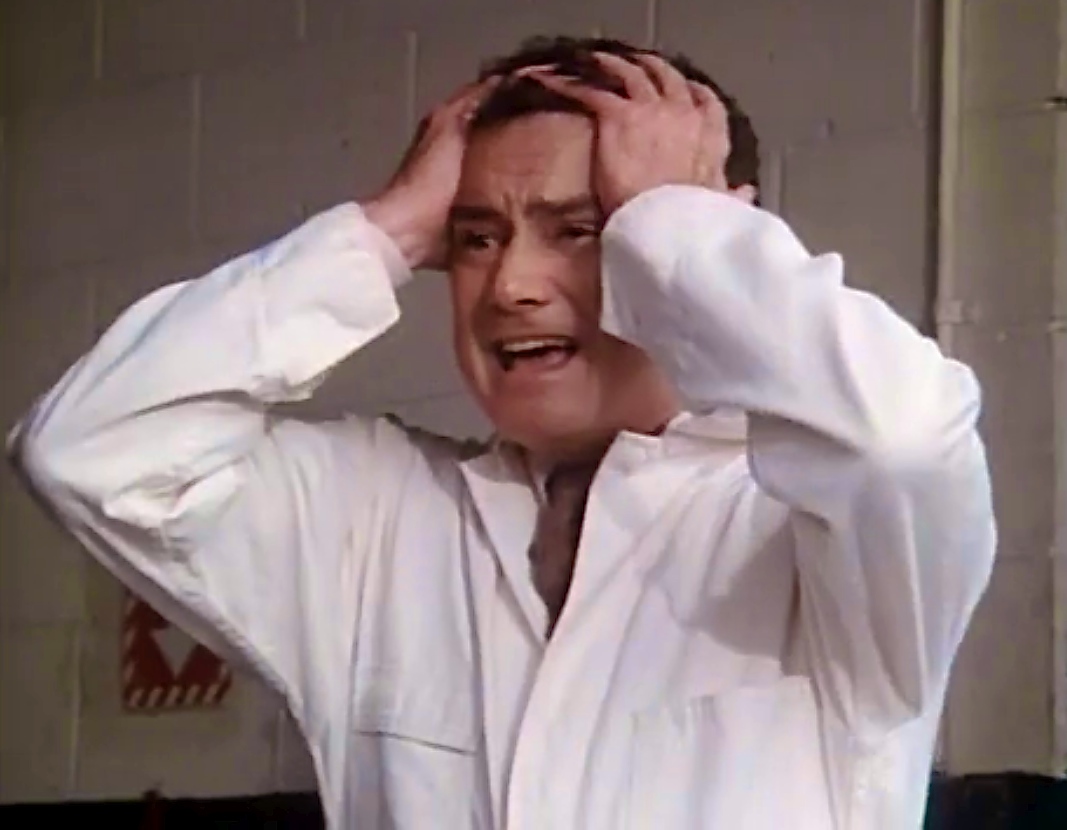 Regis Philbin is so non-famous in 1980 that all he gets in Love of It is a bit role as an auto detailer. He doesn’t even get to deliver any jokes.

A confused-looking but game Adam West shows up as a movie star who gets mixed up in the shenanigans. His inclusion proves that West was never completely forgotten in Hollywood, even though in Love of It he’s merely “pretending” to be a celebrity. Frequent Robert Altman collaborator, Henry Gibson (Nashville, Health, A Perfect Couple), whom I always confused with Arte johnson since they were both regulars on Laugh-In, is paired with fellow F.B.I. agent Tom “Mr. Cunningham” Bosley, in a contest to see who can be the most dwarf-like without being an actual dwarf.

And of course, there’s Don rickles as a crazed toymaker. Duh!

Love of It, although irredeemable, is actually a potent time capsule of what was on the public’s mind at the end of the 70’s. To make the film an “adult” movie, the writers throw in a lot of politics and buzz words. Dissatisfaction with political leaders, mistrust of American institutions, and frustration with the social upheavals of the day permeate this mess, starting with the symbolic battle between the F.B.I., the C.I.A. and the U.S. military. These forces, meant to protect America from outside threats, are now busy fighting each other. They are also willing to kill a pretty lady to get the micro-chip back. Mind you, there are no Russian assassins after her, just American ones. 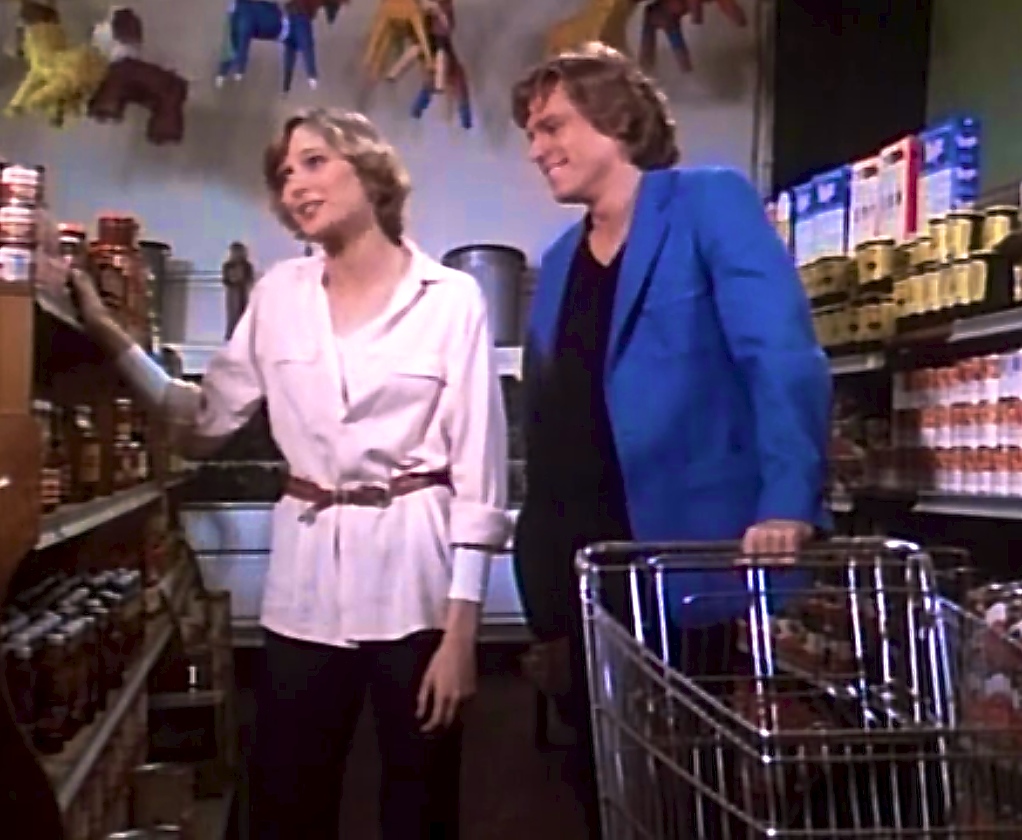 Deborah Raffin’s former activist brings up women’s liberation quite a bit. In the finale, our heroine promises Conaway she will agree to intermittent sex before marriage. This declaration manages to be risqué and conservative at the same time. Conaway returns her passionate promise with one of his own,

Conaway
(to Raffin)
…And I’m willing to care about what you believe in!

Our heroes visit a hick gas station, run by a bone-head who has a boom box to his ear at all times. Nobody actually likes music this much.

They get to ride in this crazy car for awhile. That’s pretty cool, right?

Next Week: Jennifer on my Mind (1971), or Panic in Shneedle Park