People often refer to Lifetime movies as their ‘guilty pleasure.’  The only reason someone should feel guilty over a Lifetime movie is because they were an actor in one. The rest of us should rest easy and revel in the enjoyment they offer. Lifetime movies are beautiful, psychotic little messes, and we should nurture them with love. Who else is going to make us laugh AND incorrectly inform us about true stories!?! No one, that’s who. Thankfully, Netflix is kind enough to supply us with many Lifetime masterpieces. Join me, as I sort through them all, one week at a time. * SPOILERS AHEAD, SO DON’T BE A BITCH.

Is it over yet? I didn’t know I was gonna need a pre-workout drink and an Adderall just to stay awake during a movie about a teenage sex scandal. You’d think the true story of private school kids getting caught fellating 5-1 in the locker room would have been obscene and inappropriate enough to result in, at the very least, some type of sensational teen drama a la Gossip Girl.

And yes, that scandal is what Restless Virgins was supposed to be about. In 2005, the fancy, Milton Academy made national headlines when a consenting 15-year old girl played 5 fellow students’ flutes in the locker room. Someone caught the live orchestra concert, reported it, it made national news and all 5 boys were expelled. 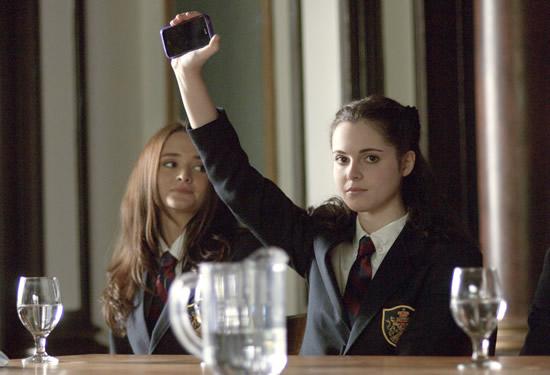 Sounds like a strong enough headline to make a made-for-tv-movie. On the one hand, I kinda don’t care about those 6 kids’ sexcapade. But, on the other hand, I’m drawn in. I’d like to know more about this girl. Where did her youth go? She should be worried about a first kiss, not how to break up a sword fight. And still, I’m kinda impressed. Physically, what she maneuvered is no easy feat, on top of which, I admire her liberal European attitude. Yeah, okay. I’ll watch a Lifetime movie about her.

Unfortunately, in Restless Virgins, the scandal played second fiddle to some fictional insipid couple’s love story. It might have even been third fiddle… It’s almost as if they wrote a movie about two dull poor kids, felt it needed a little pizzazz, and added a hurdle for them to reign heroic over. Lifetime claims Restless Virgins is ‘based on a true story’ despite the film only being about 10% loyal to the real-life scandal. But the lack of integrity isn’t even really my problem. You can’t believe Lifetime’s true story films, anyway; I’ve learned that the hard way. I mostly just couldn’t understand why Lifetime turned their back on themselves. Restless Virgins isn’t campy. It is actually filled with decent-to-good actors, a mostly attractive cast, and a genuine effort on everyone’s part to make a movie they couldn’t be embarrassed about. Someone is clearly attempting to revamp Lifetime’s image by providing some level of respectable work, but I’m sad to say the efforts are, so far, disappointing.

I swear to Lindsay Lohan, despite being its most decent movie, Restless Virgins is the most un-stimulating movie Lifetime has ever produced. It’s not well-written, it doesn’t come close to retelling the true events and it isn’t ridiculous enough to find amusing.

It’s a middle of the road movie that’s just kinda there.  And if there’s one thing I learned from Restless Virgins, it’s that anything in the middle class sucks. Skip it.