Here’s the gimmick of these reviews, dear reader. There are times where you’d like to get on Netflix and treat yourself to a double feature. Luckily, after viewing a film, Netflix immediately provides compatible options based on the previous film as the credits roll. In these reviews, I will watch and review one film, pick a second film from the list of three films that Netflix suggests without reading the star rating or plot synopsis, review that film, then put in a verdict on whether or not the films compliment each other or are an unruly pairing. Let’s get started!

The Triplets of Belleville

The Triplets of Belleville is an international co-production featuring companies from France, the UK, Belgium, and Canada coming together to create a wonderful animated feature. The story involves a grandmother, Madame Souza, who raises her grandson, aptly named “Champion,” to become a prospective Tour de France winner. However, during the cycling race Champion is kidnapped by gangsters. Souza, along with her obese dog, Bruno, try to chase down the kidnappers and along the way meet up with popular 1930’s jazz singers, The Triplets of Belleville, who help Souza get her grandson back between Stomp-like music concerts and frog-based meals.

The film opens in a very Merry Melodies style (with intentional film scratches and racial insensitivity driving the point home) as a throwback then proceeds to introduce a very visually engaging style of animation and character models. The color palette leans on drab but is visually distinct with reds and yellows. The style of the drawing is reminiscent of older Disney films such as The Rescuers, gritty and scratchy, but aptly uses computer animation and live-action backgrounds for certain sequences that accent the film rather than stick out like sore thumbs. The characters move smoothly despite their surreal features (you’ll never look at calf muscles the same way again) and move believably (well, unless you’re a henchman driving a car). The film is well directed in that the characters are able to express their inner feelings using body language and facial expressions successfully. While that trait is overall important in an animated feature, it is especially important in Triplets of Belleville since there are only three lines of non-environmental dialogue in the entire piece. In the place of dialogue, the Triplets provide some wonderful musical interludes featuring rustling newspaper, a refrigerator, a vacuum cleaner, and other objects along with a musical score that sets the proper mood and tone in each scene.

This is wonderful piece and deserves a watch for its score, its style, and excellent storytelling. Hell, it should be in your queue just for being able to hold a modern audience’s attention for nearly 90 minutes with barely a word spoken. The Rabbi’s Cat is a French animated feature based off a series of comics of the same title. Taking place in the Algiers in the 1920’s, the film stars an unnamed cat who gains the power of human speech after consuming a parrot owned by his master, Rabbi Sfar. The now-talking cat implores his master that he get a bar mitzvah and become a converted Jew in order to earn his favor and return into the loving, petting, fish-feeding hands of the rabbi’s daughter, Zlabya. The two strike a deal when the Rabbi tries to pass a French dictation test with the multi-lingual cat’s help and the Rabbi teaching the cat what it means to be Jewish. Things take a turn when a Russian Jew escaping prejudice during the Russian Civil War and recruits the Rabbi and his cat on a journey to find a city of African Jews in Ethiopia, where life and thus the Jewish faith began.

The film’s animation and style jump around. The opening credit sequence is equal parts Pink Panther and James Bond-silhouette. The backgrounds are incredibly detailed but the character models are simpler, something out of a Babar or Arthur cartoon but then some characters look like they walked out of Prince of Egypt. Then there are moments where the art goes a bit more exaggerated and gonzo for dream sequences, exposition scenes, and scenes that may or may not have happened. Needless to say, the film tries to keep things visually interesting given the simple story. The plot of the story came from separate issues of a comic book series, so some plot points do not get resolved and are left hanging either intentionally for the sake of a sequel or perhaps the resolution had yet to be written. For some the plot may be a little too blasé and the character development goes a little bit everywhere with the focus shifting off of some characters then never returning back. With that said, the content is refreshing and isn’t afraid to address issues that are considered impolite at the dinner table. Religious fundamentalism, agnosticism, atheism, the similarities and differences between the Jewish faith and Islam, the differences between followers of the same faith, racism, cultural xenophobia, and the coexistence (hell, even friendship) of stout teachers of Judaism, Christianity, and Islam are touched upon in this animated film that is suitable for teens and older. The film also takes a stance against racial caricatures along with having a playful rib against an unnamed European comic icon (SPOILERS: It’s Tintin). Needless to say, I haven’t seen an animated film like this that spouted so much about any faith without it becoming preachy and at the same time entertaining a diverse view on it.

Overall, while the film’s plot is rather jumpy, the content and characters were intriguing enough for me to keep watching. The design of the art kept me watching as well. I recommend this film if you are already inclined to watch animated films, aren’t afraid of subtitles, and have an interest in theology and history. However, if you two out of the three apply to you, you might want to check something else out. 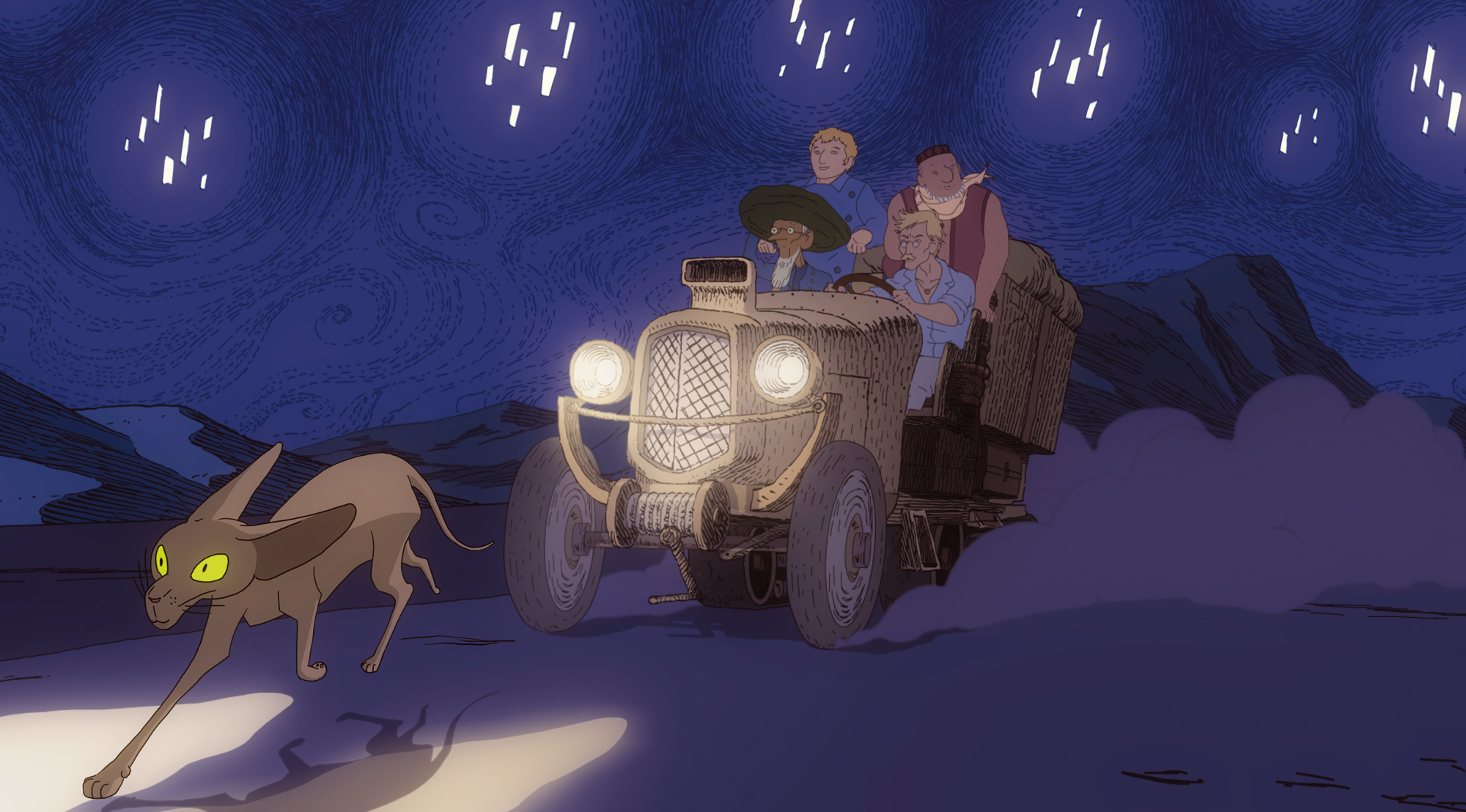 Commonalities: Both films are animated and primarily created in France. Both were originally in French and are under 90 minutes long. There are also scenes of a car getting fixed in both.

Compatibility: I’m not sure. Both are animated features and French, so on paper it would seem like a natural fit. However, if we ignored that they were both animated and pretended they were live action and in English, these movies wouldn’t even be in the same discussion. The plots and themes are far too different from each other.

Verdict: Despite what I just written above about the plots being too different from each other, I thought this was still a fine double feature. Perhaps a person who would be willing to watch a near-silent foreign animated film is considered patient and eclectic enough to follow it up with another foreign animated film that’s theologically and culturally heavy. So should it be a double feature? I’d say yes, but reverse it. Watch The Rabbi’s Cat first, talk about the film with your fellow cinephiles over a dinner break then watch Triplets of Belleville over dessert. It’d be an entertaining yet thought provoking evening in.