So what if the only Scorsese movie Netflix Streaming offers is Last Temptation of Christ? Who cares if their Spielberg collection consists of Amistad, Hook and 1941? What Netflix does have in abundance is garbage. It’s time to surrender and celebrate it. This isn’t so bad it’s good.. this is so bad it’s Netflix.

Lets begin our Slow Children of Star Wars series and look at some delightfully awful sci-fi available to you, the Netflix consumer. 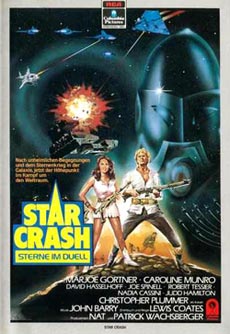 Star Crash offers the kind of maddening disorientation that immediately has viewers crying out in anguish, “What godforsaken country is responsible for this?!” It turns out Crash is an Italian made, C-grade space adventure that was eventually bought by Roger Corman’s New World Pictures. We should thank Corman for saving the film from an uncertain future; Star Crash just might be the very best terrible sci-fi movie ever made. What makes the film so awkward and loony, among a million other things, is the mostly dubbed dialogue; a necessary ingredient for any truly misguided film production. Trying to figure out the logic behind the voice dubbing in Crash is like tackling advanced calculus. For example, the British actress, Caroline Munro (Stella Star), is given an American accent, the robot “L” is given a Hill Billy accent, Marjoe Gortner (Akton) dubs over his own voice and yet David Hasselhoff and Christopher Plummer’s original dialogue is actually kept and used. I suppose it’s the European style of filmmaking to not care about sound until the post process, but it’s obvious the makers of Crash are trying to cover up some real bad audio shit that went down. Oh, and as an added bonus, the barely animated stop-motion animation will make you want to eat your own face off. Although one probably can’t tell from his performance as Akton, in Star Crash, Marjoe Gortner once had the power to move hearts and minds. At the age of four he was named the “World’s Youngest Ordained Minister.” Traveling with his family, Gortner praised the Lord and performed faith healings in revival tent shows all over the country, all the way into his late-twenties. A documentary crew captured his last tour on the revival circuit and the resulting movie, Marjoe, ended up winning the 1972 Oscar for Best Documentary. In Marjoe, the charismatic and golden fro’d Gortner admits that faith healing is purely a money making con. He also announces his retirement from the game and reveals he’s Hollywood-bound to become an actor and singer. Gortner used that Oscar heat to get a record contract which resulted in just one album that tanked immediately. However, he did manage to work steadily as an actor up until the mid-nineties.  In Star Crash, Gortner certainly makes for an unconventional leading man, what with his big shnoz and yellow mop of curly hair. Slap some of overalls on the man and he could have starred in Godspell for the next 40 years, but he just doesn’t look at home in outer space. The luscious Munro must have been psyched when she signed on to play Stella Star in Star Crash, since the working title of Crash was actually The Adventures of Stella Star and according to IMBb it was released with that name in America. Munro was fresh off her role as Naomi in The Spy Who Loved Me and must have felt it was time to headline a picture. She probably wasn’t so psyched after she saw the movie. I’m sure she was relieved when they eventually took her character’s name off it.  Munro wears a leather space bikini for almost the entire movie, even when she’s doing hard labor in a space prison. The story goes that when the filmmakers couldn’t afford to fly Munro back to re-dub her lines, they had actress Candy Clark (The Man Who Fell to Earth) do it. Clark happened to be around since she was married to Marjoe Gortner at the time. The twenty five year old Hoff only had a few credits under his belt when he appeared in Crash as Prince Simon. In the film he must courageously battle Marjoe for the title of  “Tallest, Thinnest Asexual in Space.” Spoiler Alert: it’s the Hoff by a landslide. Even though none of the lira spent on Star Crash is right up there on screen, somehow there was cash left in the jar to hire Plummer, a.k.a. “Captain Gravitas.” Plummer brings a solemn, Shakespearean flair to his role as the King of Space (or whatever the hell he’s supposed to be). In the final shot of Crash, Plummer looks straight into the camera and spews complete bullshit just like a morphine-addled Bela Legosi in an Ed Wood joint. Sure, it’s always disheartening to see such an accomplished actor “debase” themselves, but as it turns out, Plummer didn’t take things so seriously. In an old interview he admits to taking the Crash role because it meant three days hanging out in Rome. Good enough reason for me. Hey man, just because Plummer isn’t embarrassed barking out orders like, “Imperial battleship! Halt the flow of time!” who are we to judge?

By far the biggest slummer on the list is composer John Barry, a Hollywood veteran who scored twelve Bond films, including the first seven of the series. He also happened to score Roger Moore’s Moonraker (1980), another crazy outer space flick, right after working on Star Crash. I’d like to think that Barry finished the Moonraker gig first and then just dumped all the unusable musical scraps from that movie directly into Crash. Did Barry work on Crash for three days in Rome, too? It must have taken him longer than that, no? Actually, it appears Barry liked to work fast. He scored five movies in 1979 and five again in 1980. According to IMDb, The makers of Crash tried to stop Barry from looking at the dailies for fear he’d quit on the spot. There’s something kind of cool about a ripped up, washed out B-movie being captured for all eternity on a digital HD file; it’s what the term “polishing a turd” was invented for. The clarity of a digital file makes Crash‘s graininess, streaks and scratches look beautifully pristine. Crash‘s vision of outer space is dark and ominous, sure, but it’s also kind of colorful and festive. Just like the back of a Spencer’s Gifts. 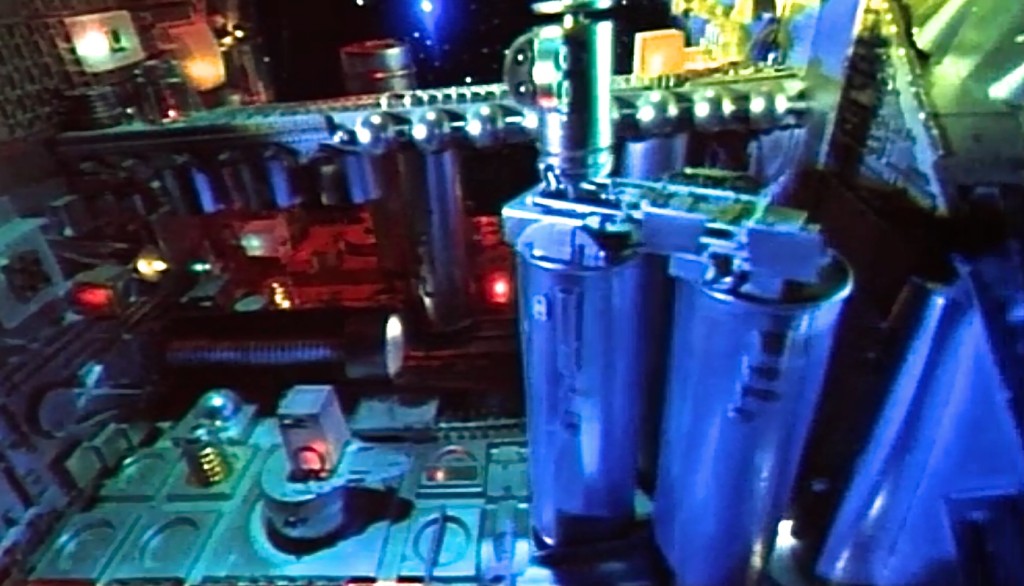 Roger Corman was so happy with his Star Crash purchase he immediately set out to make a space drama of his own. And thus…

Next Week: Battle Beyond the Stars