So what if the only Scorsese movie Netflix Streaming offers is Last Temptation of Christ? Who cares if their Spielberg collection consists of Amistad, Hook and 1941? What Netflix does have in abundance is garbage. It’s time to surrender and celebrate it. This isn’t so bad it’s good.. this is so bad it’s Netflix.

This week we end our Let’s Get These Out of the Way series with the third film in the Holy Trinity of disco musicals. Robert Stigwood, the Australian owner of RSO records, was a producer on Grease (1978) along with Allan “Can’t Stop the Music” Carr. When he took on Grease, Stigwood was already a veteran in the rock musical racket, having produced film versions of Jesus Christ Superstar (1973), The Who’s Tommy (1974), Bugsy Malone (1976) and had finally hit the jackpot with Saturday Night Fever (1977).  After Fever and Grease, Stigwood could do wrong, or so the world thought. He immediately set his sights on a lavish jukebox musical based on late-period Beatles songs. It’s hard to imagine just what he was thinking.

Sure, there had been Beatles jukebox musical films in the past (Hard Days Night, Help!, Yellow Submarine), but the thing was that all of those had actual Beatles in them. To star in this creaky vehicle, Stigwood chose the two biggest musical acts in the world at the time, The Bee Gees and Peter Frampton (Barry Gibb and Frampton worked on Grease’s opening theme song together). Why Stigwood thought that these four doll-haired goofballs could headline a major motion picture is again, unclear. It’s also unclear why the Gibb brothers would even want to star in a musical based on someone else’s songs. People forget that the Gibb brothers were contemporaries of the Beatles; they were actually performing in Australia as early as 1958, before the Beatles ever formed.

I would imagine Barry Gibb being a bit insulted at the prospect of singing the back catalog of a former musical rival. Would Depeche Mode ever star in a movie based on late-period U2 songs? Would the Allmann Brothers ever star in The Lynyrd Skynyrd Story? Would Blink 182 ever headline the American Idiot film? On the other hand, I can also imagine (me and my imagination!) the Gibbs saying “We get to sing Beatles songs? We fuckin’ love The Beatles! We’ll do it!” 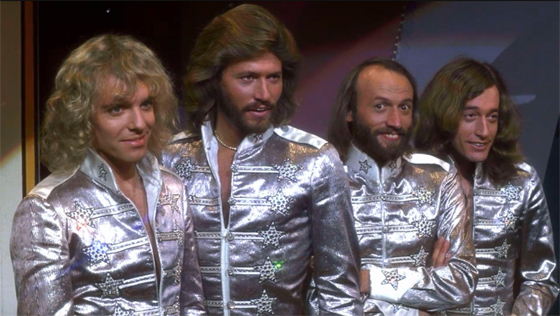 Just like a proper rock opera, Sgt. Pepper’s Lonely Hearts Club Band has no spoken lines other than George Burns’ narration. The filmmakers let the music do the talking which is a terrible, terrible mistake. It was ridiculous to try and crow-bar a random collection of Beatles tunes into a wafer-thin narrative structure and the result is as one would expect. Sure, a little dialogue would have smoothed over some rough patches in the story, but the story wasn’t worth telling in the first place. So, when watching Sgt. Pepper, one should be very thankful that Frampton and the Gibbs didn’t have to speak. Just imagine (here I go again!) how much worse our experience would be if we had to watch these guys do line readings. As it is, the boys really knock it out of the park, having to spend most of their screen time either lip-syncing or gawking and pointing at things.  The biggest “gawk and point” scene comes when they visit sleazy L.A. and their limo drives past a gaggle of hookers on the street. They point and gawk wildly, their jaws drop and they look at each other as if to say, “What are those things? Do we get to have intercourse with them? When? Will their private parts end up devouring me?” George Martin, Beatles producer, served as musical director, conductor, arranger and producer of the Sgt. Pepper soundtrack and thus must share a huge chunk of the blame. Martin shamelessly whores out the Beatles catalog here as he is wont do every few years. Let’s not talk about George Burns’ “Fixing a Hole,” Steve Martin’s “Maxwell’s Silver Hammer” or Alice Cooper’s “Because” (trust me, it’s not cool). However, Earth, Wind & Fire’s “Got to Get You Into My Life” is worth a listen and Aerosmith’s Come Together kicks a lot of ass. Even the off-putting version of “She’s Leaving Home,” sung entirely by robots, sounds pretty fucking cool some 35 years after the fact; like Daft Punk for Dummies. Let’s be honest; the idea of the Bee Gee’s legendary voices singing legendary Beatles songs is a pretty amazing one. At the very least, Pepper provides the thrill of watching two musical titans (and Peter Frampton) colliding and then working as one. It matters not why they fought; what matters is that it happened. I can imagine (Whoa, here I go again!) being a young man at the Disco Demolition Night in Chicago, 1979, Comiskey Park. My hatred for disco (“disco” being an umbrella term here for dance music, gays and minorities) is pulsating through my entire body. I watch the park get blown up. I run through the smoke and the screaming. I steal a bat from the Sox dugout and start smashing seats. I rip up some soil, I slide into home plate. Then I look to the heavens and ask god to please make a movie in which Aerosmith beats the shit out of the Bee Gees. Well, it did happen. Sort of! To be more accurate, Peter Frampton goes mano-a-mano with Steven Tyler while the frail Bee Gees have to take on the other four meaty and ornery Aerosmith dudes. It doesn’t seem like a fair fight. Unfortunately the wrong guys win; Frampton throws Tyler to his death. I wonder if Tyler was sober enough to realize that he wasn’t in a real fight. Alas, there is collateral damage; poor Strawberry Fields (Sandy Farina), Frampton’s girlfriend, falls to her death during the fracas. The viewer definitely knows she’s dead because the filmmakers chose, in what may be the single worst editing decision in the history of movies, not to cut away when Strawberry’s floppy dummy falls and violently hits the floor. This leads us to… After Strawberry’s funeral, Barry Gibb sings “A Day in the Life” to his mourning brothers. Why does he do this? Because “A Day in the Life” has a sad feel to it, that’s why. Never mind all the weird shit in there about the Albert Hall and the four thousand holes and the House of Lords, the song really captures the grief we’re all feeling at Strawberry’s untimely passing. It’s a shame to see such a sweet piece of ass just die so senselessly like that; and so floppily. And then it happens; Barry kneels down, looks at his brothers and sings, “Id love to TURNNN…YOU…ONNN.” Thank god this TMI™ moment is interrupted by Frampton, who tries to commit suicide.

The Pepper film might be most famous for its live re-creation of the Beatles Sgt. Pepper album cover. A real who’s who of the WHY?! WHY?! crowd appears in the film’s finale to sing the “Pepper Reprise” and one thing is clear right away; these people showed up because they heard there was coke. Also, it’s painfully obvious that nobody knows the words, nobody knows what the hell is going on and everybody is super-embarrassed about all of it. All of the important and legendary people featured on the actual Beatles album cover are swapped out here for some pretty questionable characters. Karl Marx is replaced by Wolfman Jack (was Marx was the original Wolfman Jack?), Marlene Dietrich by Debbie Reynolds, Carl Jung by Sha na na, Bob Dylan by Leif Garrett, Edgar Allen Poe by Helen Reddy and Albert Einstein is represented by a combo of Hank Williams Jr. and one Pointer Sister.

Robert Stigwood followed up Sgt. Pepper with another flop, Moment by Moment (1978), a romantic drama starring John Travolta and Lily Tomlin. Moment will forever be known as the movie that challenged audiences to try and tell the leading man apart from the leading lady.

Next Week: The Slow Children of Star Wars: Star Crash and Battle Beyond the Stars