Please enjoy yourself today, grab your favorite family member, cuddle up and watch your favorite specials and celebrate Thanksgiving on Netflix the only way the millennial’s know how.

Orange Is The New Black - ‘F*cksgiving’
S1 Ep9
Piper misses a Thanksgiving visit from Larry when Healy throws her in solitary confinement for dancing with Alex.

On Thanksgiving, Eric can’t tell Red about failing math or about his secret engagement to Donna. Kitty’s parents add to the family chaos! 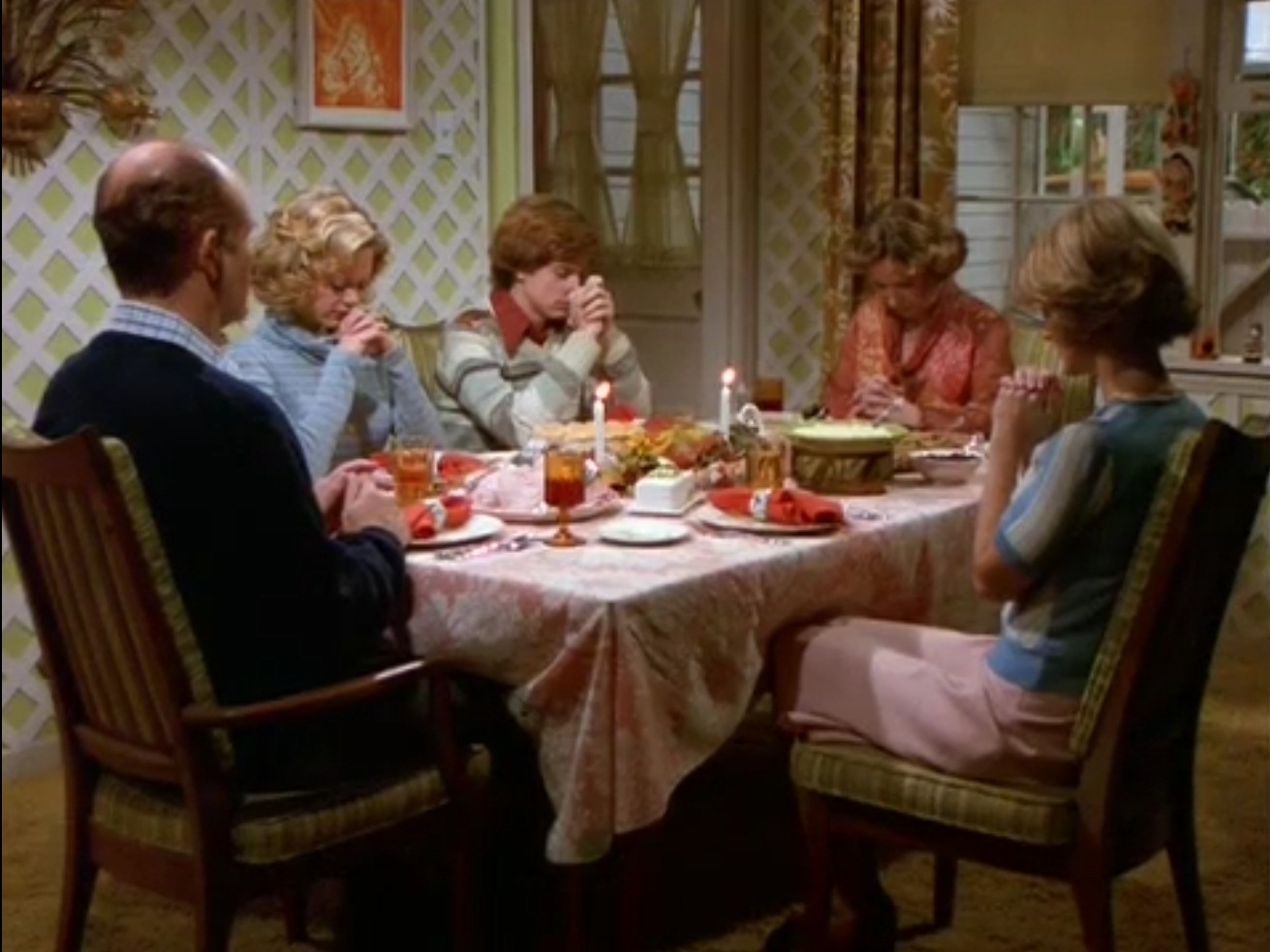 On Thanksgiving, Buffy comes across a vengeful spirit of a member of a Native American tribe who was wiped out by white settlers!

How I Met Your Mother - ‘Slapsgiving’
S3 Ep9

Lily and Marshall host their first Thanksgiving as a married couple, while Barney is tormented by the impending slap bet countdown clock! *Salutes* Major Character Arc!

As Lois cooks a big Thanksgiving meal for the neighborhood, Joe learns that his son Kevin is returning from Iraq!

Reese cons Hal and Dewey to help him cook Thanksgiving dinner. Malcolm ditches the family event for a party to pursue his latest crush! Betty and the children spend Thanksgiving with Henry’s family, as Don gets set up on a blind date with Bethany Van Nuys (Anna Camp). Dexter stops by Arthur’s house for a Thanksgiving visit and realizes that though Arthur appears to be a happy family man, he’s actually terrorizing his family! In order to snag an old flame who digs married men, Mr. Fischoeder bribes Bob into letting him pass off Linda and the kids as his own family on Thanksgiving!

Brooke tries to make a home-cooked Thanksgiving dinner, but things don’t really go as planned. After relocating at Haley’s for dinner, Mia and Alex have a cat fight over Chase! Turkey with a side of drama!

Adam is torn between his job and family after getting some surprising news. Camille and Amber share a bonding moment while preparing Thanksgiving dinner. Noah hosts a non-traditional Thanksgiving by inviting Claire over for dinner. But the meal gets awkward and uncomfortable when his ex-wife shows up with her new boyfriend, who has a small dog fetish! Grey’s Anatomy - ‘Thanks For The Memories’
S2 Ep9

Turkey Day is a lot more difficult for Meredith than she’s willing to admit! Also, Izzie throws a dinner to which it appears no one is coming.

When some bad blood with old foes compromises their ideal Thanksgiving, the gang tries to make amends by breaking bread with those they’ve crossed. Some McKinley alum return to the school to give the glee club advice, while Rachel and Kurt have a non-traditional Thanksgiving in New York. After the Arnolds’ stove stops working, Kevin’s dad asks for a raise, and gets a new promotion — but is also forced to travel for work on Thanksgiving!

Jess gets help for a “Parent Trap” style scheme to get her divorced parents back together on Thanksgiving. Jamie Lee Curtis guest stars as Jess’ mom! Lorelai and Rory have four Thanksgivings, making appearances with Lane, Sookie, and Luke on the way to dinner with Richard and Emily.

Back when Brad Pitt was still married to Jennifer Anniston, he guest starred in this Thanksgiving episode, playing Ross’s old friend from high school- who HATED Rachel! 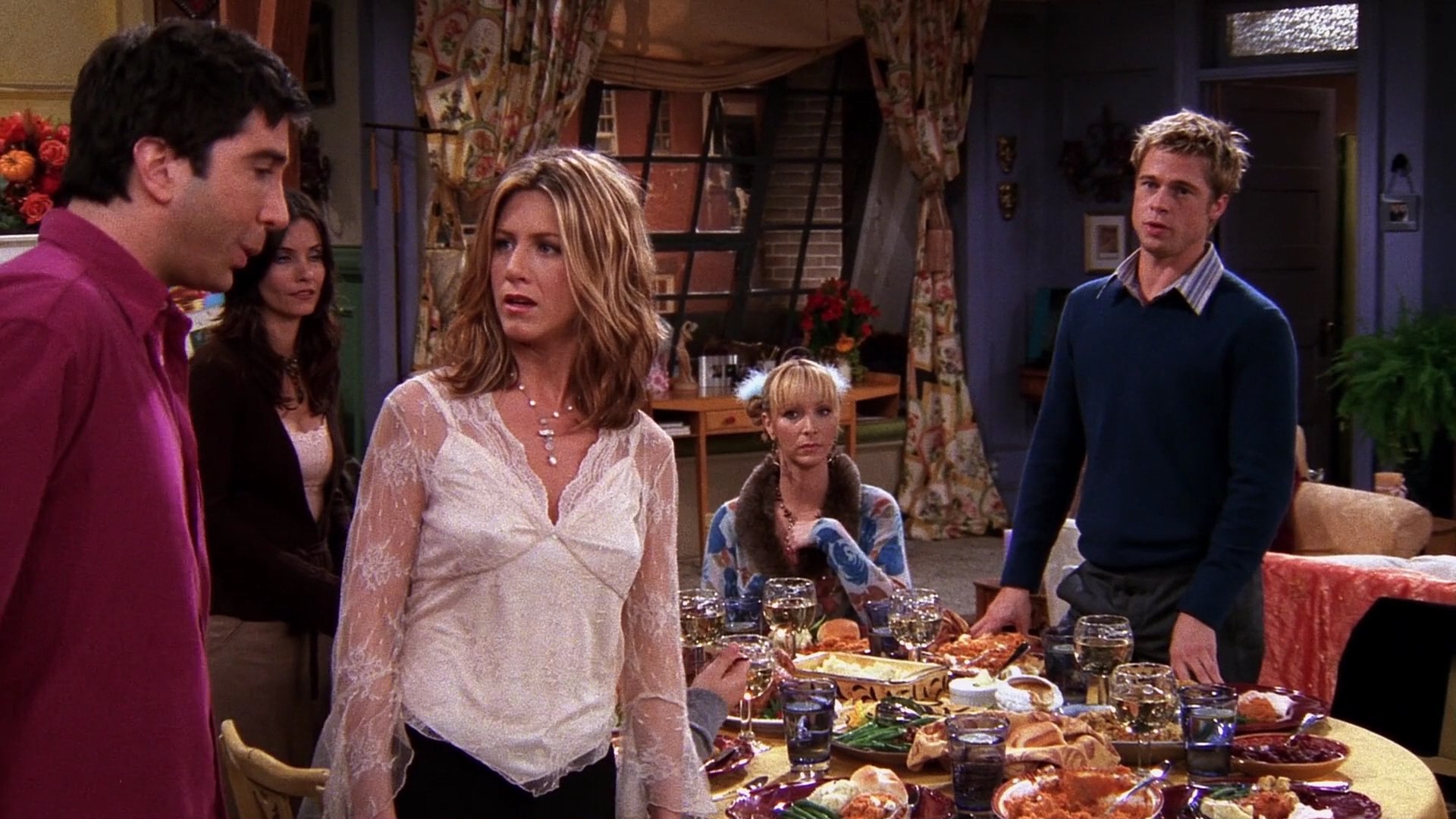