Shailene Woodley in White Bird in a Blizzard is what I like to call a catch. Not necessarily a good catch; I mean, I just imagine the producers of this film meeting at some nice office in Hollywood, nodding their heads eagerly when hearing the words “Mystery! Eva Green! 80s soundtrack!” and then abruptly stopping their optimistic head gestures when hearing the name, “Shailene Woodley.” They then think to themselves: “Ah, so Shailene Woodley is the catch.” And by god almighty she is.

Don’t get me wrong; I’ve enjoyed some, if maybe most, of Woodley’s previous performances. The Fault in Our Star had me, and a filled theater room, crying our eyes out; and her breakthrough role in The Secret Life of the American Teenager fit the series very well. However, Woodley’s acting doesn’t have range- her previous performances were successful because her previous work were Shailene Woodley projects. She fit in these films comfortably, without any complications or risks. White Bird in a Blizzard is not a Shailene Woodley project. Set in the early 80s and 90s, I found myself spending the first 15 minutes of the film not able to clear three words from my head: I’m not convinced. The film knows what kind of film it wants to be, and what direction it’s going for, Shailene Woodley on the other hand, does not. She looks like an understudy for a play she only rehearsed a couple times, imagining she would never actually be in it. Well Shailene, you are starring in White Bird in a Blizzard, and you’re kind of bringing it down.

By the time Eve starts to admittedly have disdain for her husband, her daughter Kat has grown into 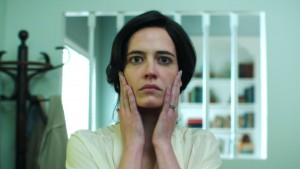 “woman hood” (if you can even call it that), losing her virginity and transforming into a damn brat. Kat is any typical teenager living in a small town- bored, stupid, and selfish. Woodley’s portrayal of this though is confusing- Though Kat is bratty, the film attempts to sculpt her into a complex character drenched in her mother’s expectations and blooming sexuality, but Shailene does a poor job of replicating this. I believe what the writers were trying to do is make us look past Kat’s bratiness and see her as a victim of her parent’s loveless marriage and demanding mother, but as much as I try, I can’t look past the brattiness. Kat, to me, is just annoying, and this is because Woodley does not know how to embody multiple emotions and sub-roles. Kat is naive, selfish, weak, horny and rude, which can apply to almost every teen to have ever come to existence, yet, Woodley can’t balance all of these emotions simultaneously, instead spilling all of these differing personalities on the floor and quickly trying to place them back in the film, whenever it seems appropriate.

Eva Green and Christoper Meloni fit into their roles perfectly, particularly Green who loses her marbles more as the film progresses. Despising her husband, and ultimately her thunder-stealing daughter, Green takes her character to next level by creepily flirting with Kat’s loser boyfriend and barging into Kat’s room in the middle of the night, demanding she reveal details about her sex life.

Though the viewer will spend most of the film appalled by Eve’s unmotherly behavior, I for one cannot help but sympathize with her. Having been raised by a dysfunctional bipolar mother myself, I have some understanding of the desperation and life crisis mothers and wives feel when they realize the house, the husband and maybe even the kids, isn’t what they thought they wanted. It is a shame to admit, but sometimes family isn’t fulfilling, and Eve’s character is a perfect example of this. So when Eve disappears one day, Kat, whose always been vocal of her embarrassment and disappointment with her mother is left with questions more than answers, but one of these questions is the hardest for her to ignore, and that is: Does it really matter that she is gone? The mystery behind’s Eve disappearance wearies as the film focuses more on Kat’s memories and strange dreams about her mother. However, I do not give a damn if Kat is sleeping with the 40-something detective assigned to her mother’s case. In any other film, this would make an interesting twist, but this unfortunately is a Shailene Woodley movie, and in Shailene Woodley movies, not everything works. Instead we see Kat making poor decisions, further proving her unlikable persona until the final 30 minutes of the film when finally the mystery starts unraveling. The revelation is not incredibly shocking, but I guess it’s worth the wait and the forceful Woodley-trying-to-be-a-woman storyline.

White Bird in a Blizzard popped its confused head at the Sundance Film Festival, and left even more confused. Though visually this film looks like an award-winning masterpiece, the film’s “catch” sabotaged it from any actual awards or critical acclaim other than the pats on the back Eva Green received. What White Bird in a Blizzard did accomplish was two things: 1. Now I want to read the book by Laura Kasischke the film is based on and 2. I discovered a Depeche Mode single I hadn’t heard prior to that horrible 80s Goth club scene where Kat dances insecurely. Guess now I understand why Kat was dancing like that- Because there are many insecurities Shailene Woodley left behind in this grown-up role. Try harder next time; or rather don’t.