In January of 1994, the decomposing body of Aziz Ghazal, 38, was found near Mt. San Jacinto, CA. Ghazal had shot himself in the head a month previous, a few hours after brutally murdering his wife and thirteen year old daughter. The Israeli born Ghazal had been the equipment manager at USC film school since 1983. Prior to the murders, he was hit with a series of major setbacks, all in rapid succession. USC fired Ghazal after a nasty fight he got into with a student over a lost camera. His wife then filed for divorce. On top of all that, a buzzed-about screenplay Ghazal had penned became instantly unsellable when the two separate studios he was in talks with (Jodie Foster’s Egg Prods. and Touchstone) found out they were being two-timed and angrily dropped him (Ghazal’s script was adapted from the novel, The Brave, which Johnny Depp ended up optioning for his directorial debut in 1997. A film no one has ever seen, The Brave stars Depp, Marlon Brando, Iggy Pop and Gibby Haynes from the Butthole Surfers).

Post killing spree, a note from Ghazal was found in his L.A. home, which read: “Please forgive me for what I’m about to do.” Of course, we can’t forgive him for his crimes, nor can we forgive him for Zombie High, a film he wrote, produced and shot with school equipment on USC’s campus, using a mostly student crew. In interviews, many of Ghazal’s former students spoke of him fondly but were quick to mention his volatile temper and combative personality. It must have been a pure pleasure to work on this future murderer’s crew. While Zombie may have been a fantastic learning experience for the students, what pisses me off about the finished product is that it was actually released as an actual “movie” that actual “people” were supposed to pay actual “money” to see. Future Oscar nominee, Virginia Madsen, plays a gifted student who gets a scholarship to Ettinger Academy, a prestigious prep school. She meets the new batch of students which includes a likable goofball and future comedy giant, Paul Feig (Freaks and Geeks, Bridesmaids and the new Ghostbusters), sexpot-to-be, Sherilyn Fenn, and Scott Coffey, a veteran of many an 80’s chestnut (Ferris Bueller, Some Kind of Wonderful, Satisfaction) who plays a spiky haired rebel. 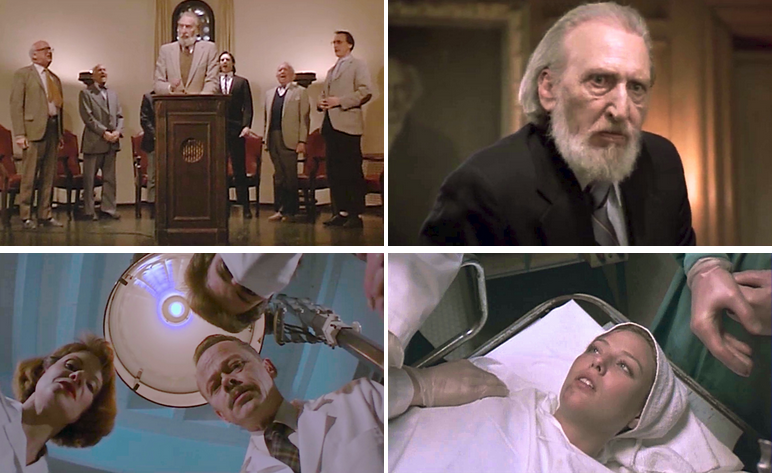 Ettinger Academy’s evil Headmaster and his cult of creepy professors turn out to be seekers of eternal life. In order to live forever they must drain the brain juice from the kids via surgery and then chug it down. The lobotomized kids turn into automatons that dress super-preppie, slick back their hair and read the Wall Street Journal.

It’s clear Ghazal is going for some sort of leftie commentary about the culture of conformity in the Reagan era, but the satiric/comedic potential of all of this dies on the vine, since Ghazal clearly has no sense of humor. Madsen and her boyfriend (James Wilder) eventually destroy the brain-dead student body by blasting a totally tubular, rockin’ tune through the school’s P.A. system. What juggernaut of a song, you may ask, has the power to deflate zombie heads? A shitty rip-off of the Beastie Boys “Fight for Your Right to Party,” called “Kiss My Butt.” There is not one thing in Zombie High that works; not one shot, not one edit, not one line reading, nothing. Again, perfectly understandable for a student film, but in a film-film it’s all very depressing. Zombie is so lame that it earned its R-rating for a handful of f-words; there really is no gore to speak of. In Zombie‘s only decent scene, Cox and Madsen get lovey-dovey at his stylish bachelor pad. Whoa! He’s got a freakin’ body-sized pin screen in his living room, bro! Talk about an ice-breaker. I only had the boring 8×10 inch pin toy as a youth. My children just have the 4×6, shitty plastic version; I’m going to throw it in the garbage right now, I don’t care how much they cry. Man, I want a big pin screen so very badly! That thing had to have been Spencer Gifts’ most expensive item. Of course, to make this cute and romantic scene an actual success, it would have been nice to see Mr. Cox’s face instead of looking at his back the whole time. Cuz, ya know, like, that’s how you FILM PEOPLE AND SHIT (students, write that down).

Many of Robert Altman’s films are still not available anywhere, but Zombie High is right there at the world’s finger tips. Aziz Ghazal certainly left us with a truckload of tragedy. Oh, and he killed his family, too.

Next Week: Adrian Zmed-heads of the world, unite and take over! For the Love of It (1980)