Friends, it’s been a tough couple of weeks; there were deadly terrorist acts in Paris and on top of that I had trouble finding a decent movie to write about. It’s not that Netflix has run out of nutball titles; it’s just that I’m trying to stay away from certain films I know will traumatize me for life. Movies like Lisa and the Devil (1974) and The House of Exorcism (1975). As you might notice, these two films have the same poster art. Their descriptions are almost identical, but not quite. There must be a story behind this, right? I was going to watch both and compare, but with a little research I found out that Lisa is from Italian horror luminary, Mario Bava, and House of Exorcism is just the same movie with a few added exorcism scenes meant to capitalize on The Exorcist‘s popularity. That’s all sort of interesting but not interesting enough to watch the movies; I’m too old to get caught in a shitty Italian horror quagmire (Sorry Furtaco!). Why Netflix decided to splurge on both versions may never be known. Perhaps they buy their Bava in bulk at a BavaBulk.com. Maybe there was a two-for-one sale at the Bava ‘n’ Things outlet.

This near-Bava experience sent me down a path where each movie I sampled was more painful than the last.

It’s all Happening, a cheap slab of British nonsense, is a vehicle for Tommy Steele, England’s very first rock star. Molded and shaped into England’s answer to Elvis, Steele put out some decent singles in the late fifties. However, the difference between Presley and Steele was obvious; Elvis was a perfect looking man and Steele was a shrimpy, big nosed cutie-pie with stereotypically bad British teeth. By 1963, both dudes had abandoned rock and roll completely, just like the world was trying to do. Presley and Steele had turned into generic triple threats. From then on it was Steele that seemed at home with the singer/dancer/actor label; Elvis never got it quite right.

Made at the at the height of the Beatles popularity, Happening takes place in a world where Beatles, and for that matter, rock music, never happened. Steele plays a fledgling executive at a record company that cranks out bad product like any other soul sucking corporate entity (according to the film, this is all perfectly fine). In order to save the orphanage he grew up in, Steele stages an enormous concert that turns into a death march of one tepid, indistinguishable singer/dancer/musician after another. 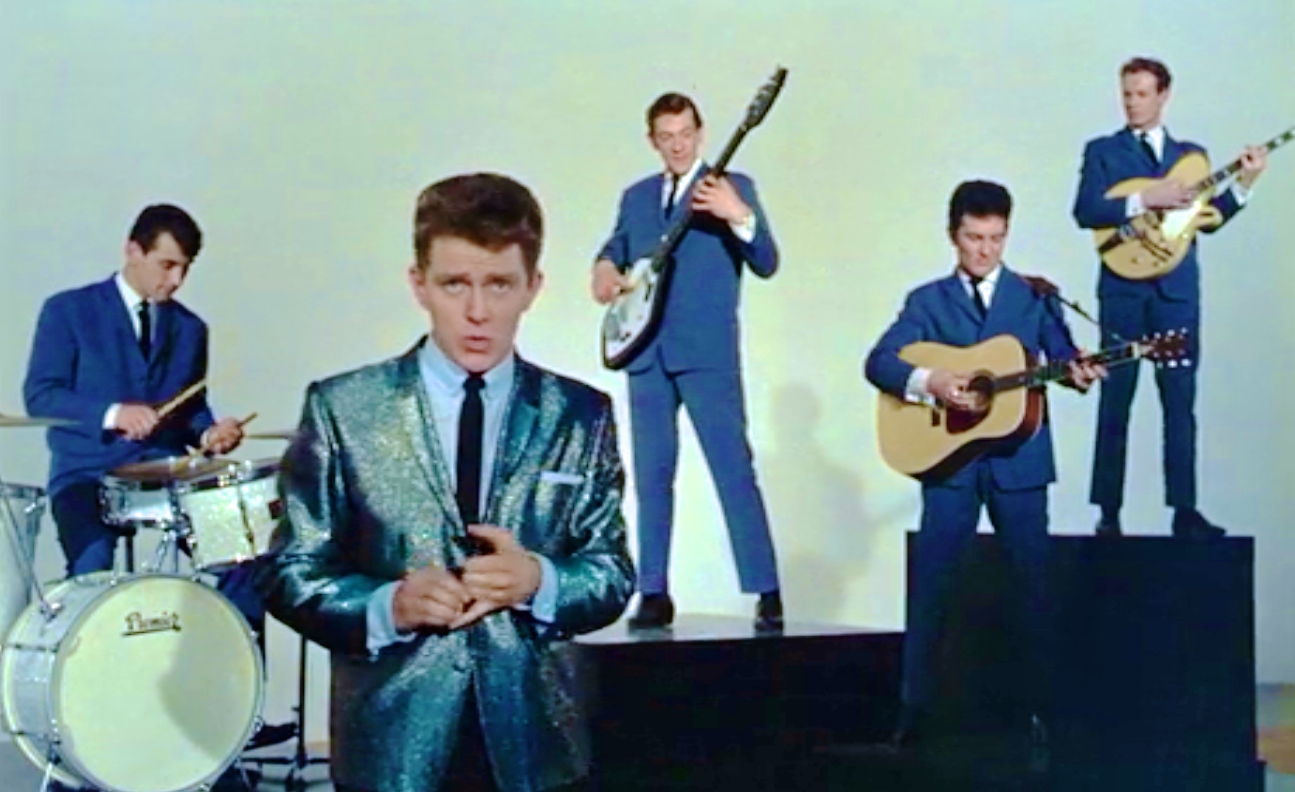 Happening and A Hard Day’s Night do have something in common; they both capture the hopelessly drab entertainment landscape England was drowning in in the early sixties. In Day’s Night, when the Fab Four arrive at TV variety show gig, they encounter an endless wave of vaudevillian bullshit entertainers- even a dance troupe moving to a shitty Beatles cover. In Happening, Tommy Steele seems perfectly happy living in this schmaltzy environment. Day’s Night makes an effort to distance the Beatles from that world. By the time of Happening, Tommy Steele was a part of the problem and the Beatles were the only solution. I moved on to Calendar Girls, yet another TV movie of the week with Tom Skerritt. We can now put Skerrit in the exclusive, “So Bad it’s Netflix 2-Timers Club,” where Christopher Plummer is waiting for him. Today we also induct Wendy Kilbourne into the club. She was the sexy robot in the TV movie, Condor (1987), and in Calendar, Kilbourne plays yet another sexy robot made entirely of human flesh.

The big question with Calendar is this: why come up with a story about nude models being bumped off by a serial killer if you’re not allowed to show any sexual or violent content whatsoever? It makes the proceedings so much more offensive, does it not?

Calendar’s producers are so confused as to how to present sexual material that they eventually give up and just cut to some androgynous disco dancing. Sharon Stone also shows up in one of her first roles. We get to see her wear too much clothing. I will always remember Modern Problems as the butt of a joke in an SCTV sketch from 1982. In it, Joe Flaherty is Count Floyd, the ever-tortured host of Melonville’s late night show, Monster Chiller Horror Theatre. The Count goes out of his way to assure his viewers that the night’s feature will be plenty scary. When he asks his dwarf henchman what movie they have, the dwarf reluctantly says under his breath, “Uhhhh, we got Modern Problems, Count Floyd.” The look of disappointment on Floyd’s face is palpable. Of course, he has no idea how scary Problems really is. Chevy Chase gives what has to be his very worst performance in Problems, a comedy so bereft of life and so repellent that even as a child I knew to stay far away from it. I’ve been avoiding Modern Problems for almost thirty five years now. However, I figured it was time to face my fears, just like Count Floyd had to. Chase plays a creepy, needy asshole who acquires telekinetic powers when toxic waste is dumped on him. The first thing he does with his powers is make a guy’s nose bleed rivers of red red kroovy all over a fancy, crowded restaurant. Ha ha? Not even the ear-splitting, scraggly voice of Brian Doyle Murray can save us. Also, Nell Carter stars as “the Other.”

So, what I’m really trying to say is, check these wonderful titles out on Netflix. I hope to return next time with a real gem that’s worth exploring- but if you think I’m gonna subject myself to In the Name of the King III: Dominic Purcell, What the Fuck Are You Doing? , you can cram it, jive turkey.