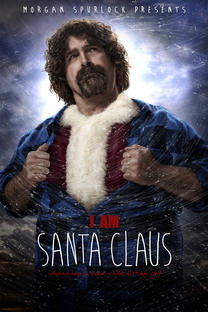 I Am Santa Claus is a well-plotted, excellently executed film that looks into the lives of the men dedicated to emulate Kris Kringle while simultaneously analyzing the debate regarding the sexual activities of Santas  and following the aspiring Santa dreams of the wrestler/author that’s best known for this:

From the producer of Supersize Me and the innovator of the Mandible Claw, I Am Santa Claus peeks into the lives of the husky, bearded men who every year look forward to become the stuff of children’s dreams. The film’s focus is on the various Santas and the variety of backgrounds and lifestyles they lead most of the year.

The movie touches on numerous Santas, but mostly follows five St. Nicks. We have Russell “Russ” Spice, a surly Santa forced out of his regular job and needs the mall gigs in order to stay afloat. In contrast, we have Bob Gerardi, a Santa that’s a successful California real estate agent the rest of the year. We also look into the life of Jim Stevenson, a gay Texan that won the “Mr. Polar Bear” competition, but has the heart of a teddy bear. There is also a New Yorker formerly known as Frank that legally changed his name to Santa Claus because being Santa had improved so much of his life and outlook. Lastly, we have Mick Foley, a popular and successful professional wrestler best known for death matches, red bloodied face, fiery promos, and baseball bats wrapped in barbed wire. However, in real life, Foley  is known as a devout lover of Christmas, Santa’s red-rosy face, fire-roasted chestnuts, and trees wrapped in tinsel. We follow Mick as he learns the Santa trade and see if he achieves his dream of listening to the Christmas wishes of children with the one ear he has left (his other ear was ripped off in a wrestling match in 1994).

The film was well shot and edited. It did a great job showcasing each Santa and providing the contrast of lifestyles, especially in the case of Bob and Russ. Aside from the original footage, the film had excellent stop-motion animated sequences in certain segments in the spirit of the classic Rankin-Bass holiday specials. The soundtrack is a solid mix of classic holiday tunes and music written with lyrics applicable to the scene. It comes off as a little bit on-the-nose, but isn’t distracting. There is never a point where the film drags and each subject gets their story told, especially Russell.

Some may complain that the film’s focus might be a bit all over the place. In fact, the film could have been three documentaries: Russell’s struggle as a Santa who wants his own living space, Foley’s Christmas dream of being Santa, and a film debating on whether the sexual activities of Santas outside of the mall (and the red suit) matter. However, I believe the film works with all of these elements since the underlying theme is that Santa Claus is so magical that his essence can come from anyone from any background. In this particular case, the fact that some want separate documentaries about each subject shows the film’s effectiveness; showcasing each subject well enough that you want to know and see more of each one. So when the weather outside is frightful and the kiddos are put to bed, check this film out on Netflix. It provides laughs and invokes emotion showcasing the Christmas spirit within all of these paunchy schmoes. While ***SPOILER ALERT*** Santa Claus isn’t real ***END SPOILERS***, you’ll be hooked on the realities these Santas live in.

Happy Holidays to all, and to all a good internet connection!