Author’s Note: Let me just tell you now, this isn’t going to be a full synopsis of the film. I’m going to bring you through the beginning to the point where the movie turned from campy horror to arguably insane pornographic material. This is something you have to watch in order to believe what you’re seeing. In all honesty, if you’re the type of person to enjoy really awful horror movies, Zombie Ass: Toilet of the Dead is absolutely for you. It’s got just as much gore, horrible acting, and strange creatures as any B-list horror, it’s just not as many movies have full on tentacle anal scenes as this. Oh, it might be worth mentioning that this movie, and as a result this article, WILL be seen as NSFW. Nearing the end of the article you’re going to see a dilated asshole with something in it.It will not be a pleasant sight. You have been warned. With that being said, I’m sorry Mom.

Today started like any other day;  I woke up, I fell asleep again. I woke up again, then decided to sleep for five more minutes. An hour later, I woke up and headed to my real life job ready to help customers (read as: watch Netflix) make some sales, (read as: watch more Netflix) and maybe watch some Netflix when I’m not doing those other two boring things. Never could I have imagined the horror in store for me.

I had originally intended to work on another piece for the site, about the ridiculous powers and the spectacular, hilarious kills that occur because of them. With that thought in mind, I innocently started streaming Zombie Ass: Toilet of the Dead. Expecting a campy, strange japanese horror comedy, I ventured forth with my notebook to log kill times into the great unknown; and what I found there as an abyss. An abyss of ass. And that ass abyss stared back. Any movie that’s title sequence is shot with dancing asses flying through the digestive system will probably come out the other side looking biologically correct.

Let me try to explain this movie first in a way that sounds like the writer might not have been a lonely, perverted man with ass issues. (ASSUES!) Five teens travel into the forest for a fun weekend of camping, when they come across a zombie that attacks them. The main character, being a karate student (because Japan), snaps his neck with a well placed kick right to the noggin. Understandably freaked out, they follow their map to a nearby village for help, only to find the small town deserted. They’re attacked by a group of zombies and are saved by the only living inhabitants of the village, a doctor and his daughter. From then on, they must fight to survive the wrath of the undead.

Sounds pretty normal, right? I thought it did. Well, I was wrong.

The ass-sanity begins early on; when they arrive at their camp, one of the teens, an aspiring model, heads to the nearby river to pursue a rumor she had heard; the trout in the stream apparently contained a parasite that if consumed, will keep you skinny. They catch a trout, cut it open, and despite protest from the group, she swallows the small worm. You could exercise and eat healthy, but we both know you won’t.

After the first zombie attack, she starts feeling some stomach pain. By the time she reaches the village, there’s about a 15-30 second sequence of her unable to contain some pretty loud butt toots while she runs to a nearby outhouse.

That’s when the shit hits the fan… and everything else.

First of all, there’s some full ass nudity here. That’s not that important. She pulls down her shorts, and squats over a little hole in the ground while she tries to push out what I’d imagine she’s thinking has to be one of those family-size soup cans, or maybe a two-liter bottle of Coke. After about 2 minutes of painful moaning, ass shots, and Hot Air from the Derriere, A face appears in the pool of shit visible through the Albert Pujols (Pooholes, get it? You LA folks better like me now) and a shit-covered arm shoots up from the Poot Chute and grabs her ass. Terrifying! 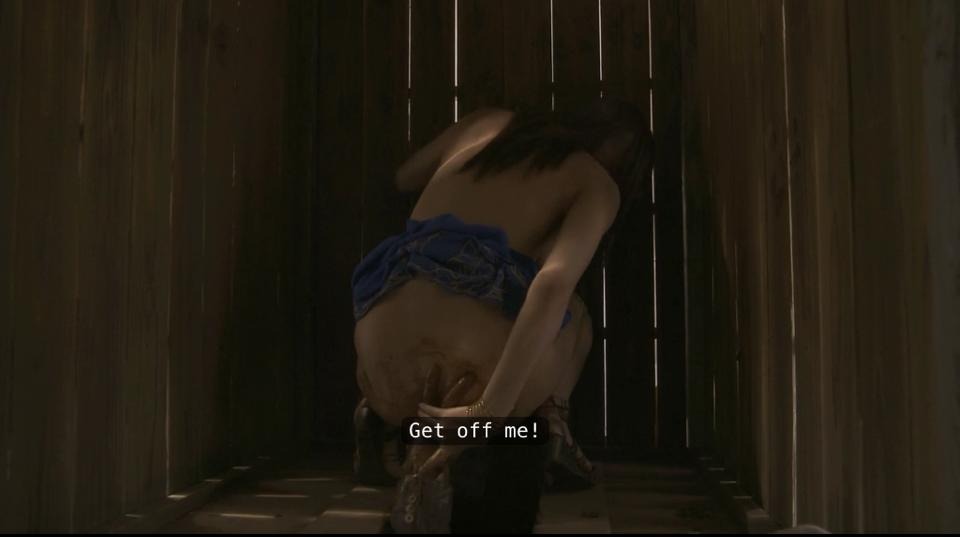 …For about a second. That’s how long it took me to realize that this was no longer a horror movie. This was porn. Dirty, nasty, shitty porn. The reason I came to this conclusion wasn’t because a Ghiradelli Goop covered arm reached up and grabbed a girl’s ass while she tried to drop a chocolate almond into a mocha river. That’s disgusting and disturbing, and kind of what’s expected in a horror movie. However, in a regular horror movie, she would have shot up, fallen over, did something to get that hand off her ass; out of surprise, fear, or some sort of emotion that tells the brain that toilet hands are not normal fucking move! This, however, is not what happened. She squatted there for a good forty-five to sixty seconds while an arm that just reached out of Brown Town grabbed, rubbed, and slapped her ass. Repeatedly. Sure, she tries to pry the hand off, but it proves to not be as effective as, say, standing up. As the head tries to raise up out of the floor, she (and no, you aren’t having a stroke reading this) farts on the zombie’s head, causing it to gag and give her a chance to run away.

Instead, she runs into the corner of the outhouse and stares at the Doo Doo Fondue covered undead rise up out of the dook depository. He didn’t want her brains, though. Good thing for him, because I assume she was lacking in the IQ department. She was not lacking, however, in the mammary department; and what do you know, this shit-covered misogynist takes notice and reaches out to grope her for a good twenty seconds, smearing butt butter all over her chest. This is the first moment she displays any sort of self preservation technique, pushing the poo-poo perv away and running out of the outhouse while a horde of zombies comes up out of the pit-o’-shit and pours out of the TURDIS. (Yes, I make Doctor Who references every time I go by a blue port-a-potty.)

At this point, she tried to run away. Her body, however, was attempting what I like to call a Poup d’etat; while she tried to make her escape, she is hindered by stomach pain and some extreme southbound winds which force her to stop. The next minute of the movie is a mind-shattering, rectal-tearing glimpse into the insanity that is the rest of this film. Seriously,  it’s what H.P. Lovecraft would have written about if Re-Animator was an anime fan fiction inspired by the process of digesting left over Taco Bell. 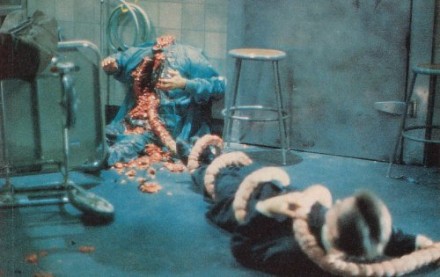 She blows a tornado of baby vomit colored gas out of her ass. We’ve all been there, don’t you even try to lie about it.

Yes. This happened. The gas reached into the sky and formed one of those japanese demon Oni masks which looked down on her and laughed, presumably because he is the timeless ancient butt demon that had posessed the writer of this movie. Crippled with pain, she falls down and tries to fight off a zombie, which ends up falling into a pile of shit and vomiting more shit into the pile of shit. The director really, really wanted you to know what you were getting into in case you hadn’t figured it out yet.

She crawled for a few seconds before making a startling realization; that little fart shield you get that keeps you from shitting when you really gotta go had finally depleted itself. She thought she was going to deuce herself. She was wrong. 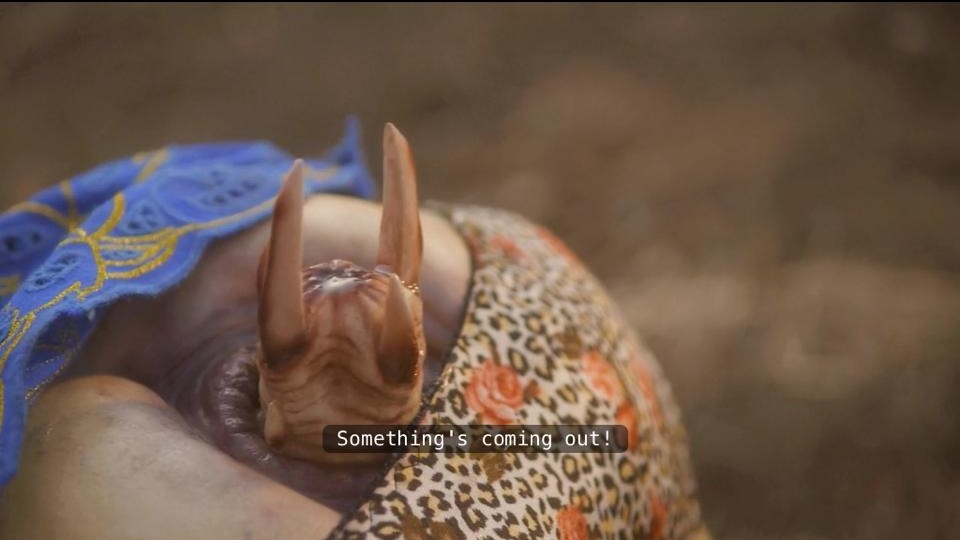 I thought I had accidentally consumed hallucinogens. I had not. My hallucinogens were right where I left them.

Jesus Christ. Yeah, you just saw that. No, I’m not sorry. Yes, that parasite she swallowed in the beginning had turned into a fully grown ass worm that was finding it’s way out. At this point, the main character was running back to save her, but saw this, and promptly turned around and ran back to the group to say that she couldn’t save her, and they run away while zombies throw ass batter at them. They are soon saved by the only uninfected inhabitant of the island, who has his own dark secret. When that secret is discovered, shit really, really hits the fan. All in all, I’d say it’s at least worth watching one time. That’s all you need. Then tell your friends to watch it, and laugh when you see their dead, scarred eyes next time you see them.

I’d like to take a moment and say something; if you’ve never read anything by H.P. Lovecraft, many of his monsters are described by causing insanity at the very sight of them. I think, by definition, this could be considered Lovecraftian. I’ve definitely lost some part of myself seeing this. It was like losing my brain virginity to some awful pity sex. I actually had to pause the movie when I saw this. Then I realized it was still on the screen and unpaused it and waited until it was off screen to pause it again so I could process it. I’m still not sure I fully understand what I saw.

All right kids, that’s as far into this madn-ass as I’m going to bring you. Trust me, this movie is still worth a watch. It’s strange, vile, poorly acted, and fecal, but somehow it still manages to be impressive somehow. Do I know how? No. More than once in the film you have to stop and either laugh at what you’re seeing, or maybe check your schizophrenia meds to make sure that doctor didn’t just prescribe you tic-tacs. I’ll tell you one thing though; the final fight scene in the movie goes full Dragonball Z style flying fight scene, and it’s as glorious as it is unbelievable.

I probably should give this movie 2 steaming turds out of 10, but for some reason, the sheer insanity of it makes it well worth a watch. So I’m going to forego the traditional rating and describe this movie with two words: Marvelously Shitsophrenic.