If you see an “Alan Smithee” in a film’s credits it means that that person wanted their real name off the project. Do a search for “Alan Smithee” on Netflix Streaming and only two titles come up. One is the Christopher Atkins vehicle (and by vehicle, I mean car), Smoke n Lightnin (1995). The other is the big city, Scott Baio romance, I Love N.Y.

A movie with no No wikipedia entry? Now I’m intrigued. I love N.Y. is the very worst kind of motion picture; an independent romantic comedy. Known as Rakkautta New Yorkissa in Finland, I Love N.Y. actually made it to the Cannes Film Festival, where I assume the filmmakers had a cute little booth right next to Troma’s. N.Y. was produced by Andrew Garroni, producer of the cult horror film, Maniac (1980), and thirty other titles that no one has ever seen or heard of. Of course he was allowed to put his name on the 2012 Maniac remake starring Elijah Wood. I’m tempted to say Garroni’s body of work is a shit sandwich with two Maniac‘s for the bread. Even though most of N.Y.‘s crew have Italian names and the script has that luscious “ESL” feel to it, the film is merely a product of Little Italy, where I assume our Alan Smithee is from. The Smithee in question here is one Gianni Bozzachi, who wrote, directed and co-produced. A real auteur, this Bozzachi, ehh? Bozzacchi’s career pretty much ended with this film; did the industry shun him or if it was a self-imposed exile? Scott Baio stars as Mario, a street-wise photographer and man of deep artistic aspirations. Mario falls in love at first sight with Nicole (Kelly Van der Velden), the teenaged daughter of a famous stage and screen actor (Christopher Plummer). Actually, Mario falls in love with Nicole’s “look” and wants nothing more than to take her picture.  Mario pitches many woo’s and over time his charm assault wears the girl down. Soon Nicole is posing for Mario in tasteful fashion shoots around town. Kelly Van Der Velden, who never made another movie after N.Y., is certainly a pretty gal, looking sort of like a combination of Tawny Kitaen and Monica Lewinsky. Nicole may be cute but Baio thinks she’s phenomenal for reasons nobody understands, not even Nicole’s father. It often seems like Mario is trying to convince us, the audience, that Nicole is a real find. Neither he, nor she is able to sway us, since Van Der Velden can’t really act. However, her rich girl blandness actually mixes well with Baio’s in your face passion and unbridled ethnicity. Nicole and Mario’s relationship reminded me of Rocky and Adrian’s; he’s a complete oaf but he does all the work and that suits both of them just fine.

The movie sings whenever Mario attempts to show Nicole “his” New York in several breezy montages. They walk in the park and Mario tells her about his many photo projects. They get ice cream, he tries to take pictures of squirrels, they ride horses, he shoots her twirling around on an aircraft carrier. Mario tells her “my dad is dead” and they both share a laugh. In a very Taxi Driver moment, Mario takes Nicole to a sleazy burlesque joint, every gal’s favorite place to unwind. Mario takes Nicole to his neighborhood in Little Italy and before you know it, she’s hitting things with sticks in the street just like the boys. Soon, they’re smooching on the subway. It’s all very sweet in its way. Boy, was I surprised when I found myself buying- and loving- their love! Even N.Y.‘s limp dick of an ending is surprisingly even-handed. Nicole and Mario are having a lot of issues, Mario tells Nicole he’s going off on a long assignment and when he gets back… they’ll see where things are. It’s not exactly Officer and a Gentleman, but it’s a perfect non-ending to a perfect non-movie.

The point where we’re finally allowed to start hating Mario, Nicole and the movie itself comes when Mario gets a creative impulse to photograph Nicole riding a motorcycle. He lies on his back and shoots up at her as she revs it over the Brooklyn Bridge. It’s all very glamorous except that she doesn’t know how to ride a motorcycle, they don’t have helmets and both of them are going to die. Perhaps someone should have told Mario that photographs are still images and he could have easily created the illusion of Nicole riding a motorcycle without actually riding a motorcycle. The suicide shoot goes smoothly for a while, until they crash. Don’t worry, they’re perfectly fine. It would have been awesome if the post-accident scene between them went like this:

“Why are we so god damn stupid, babe?”

“And I almost killed you!”

“We’re made for each other!”

Actually, all Mario says to Nicole is “I’m stupid for letting you drive” which is barely an apology. And guess what these two geniuses do just a few scenes later? They get back on the bike. Disgraziano! Can I please get an antagonist up in this bitch? At first it seems the film is going to have a slob vs. snob-type showdown between John Yeats, the upper-crusty father and Mario the street kid. However, the truth is that Plummer’s Yeats is not a bad guy at all; just overly protective of Nicole. He’s a pure delight, actually. Yeats doesn’t even put his hands on Mario after he nearly kills his daughter in a bike accident. The bad guy turns out to be Mario himself, who becomes petty and prone to depression rather quickly. All Mario seems to enjoy doing is putting poor Nicole in physical danger. At one point, she has to get Mario out of a jam by karate kicking the shit out of a couple guys. In the 80’s, homophobia was simply the coolest, hottest thing around. That’s why N.Y. deserves some credit for having a gay wedding scene that’s shockingly non-judgmental for 1987. Mario gets an assignment to shoot the ceremony out on Fire Island and he brings Nicole. Sure, it’s a very hippy-dippy, white-robed and silly affair, but the wedding is another symbol of what Mario loves about New York; the freedom. 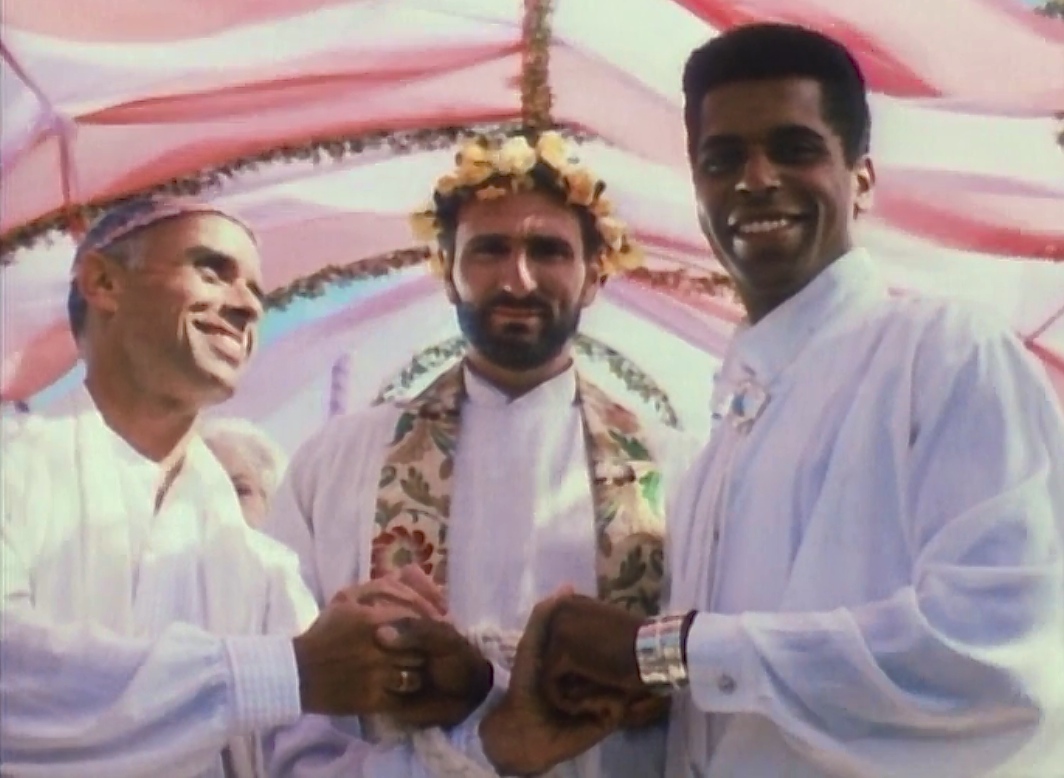 So, in the end we have a tan and sexy Christopher Plummer and a nominally interesting tale of young love in the city. I’m going to come right out an say it; Gianni Bozzacchi- Slap your name back on this motherfucker.