Our Slow Children of Star Wars celebration concludes with:

With a budget of six million dollars, Message from Space was the most expensive film Japan had ever produced at the time. By 1978, every country on the planet was busy making their own “Star Wars,” and Message was Japan’s first attempt. Hoping for international success, the filmmakers hired three American actors to headline (Vic Morrow, Philip Casnoff, Peggy Lee Brennan). You’ll be glad to know all three were allowed to bring their heavy New Yawk accents with them. Did the director ask them to be super New York-ey or did he just not give a shit if they used their real voices?

In a momentary lapse of reason, Universal Pictures forked over a million bucks for Message‘s U.S. distribution rights. Reknowned critics like Janet Maslin actually had to review the thing (I am still feeling embarrassed for her). Alas, Message received no love in America; Siskel & Ebert’s Sneak Previews even featured it in their “Dog of the Week” segment. It must have done some business in its native land, where a spin-off TV series, Message from Space: Galactic Wars, made it to twenty seven episodes.

I have to ask- if Message‘s budget was so damn big, how come the actors had to wear plastic vegetation on their heads? 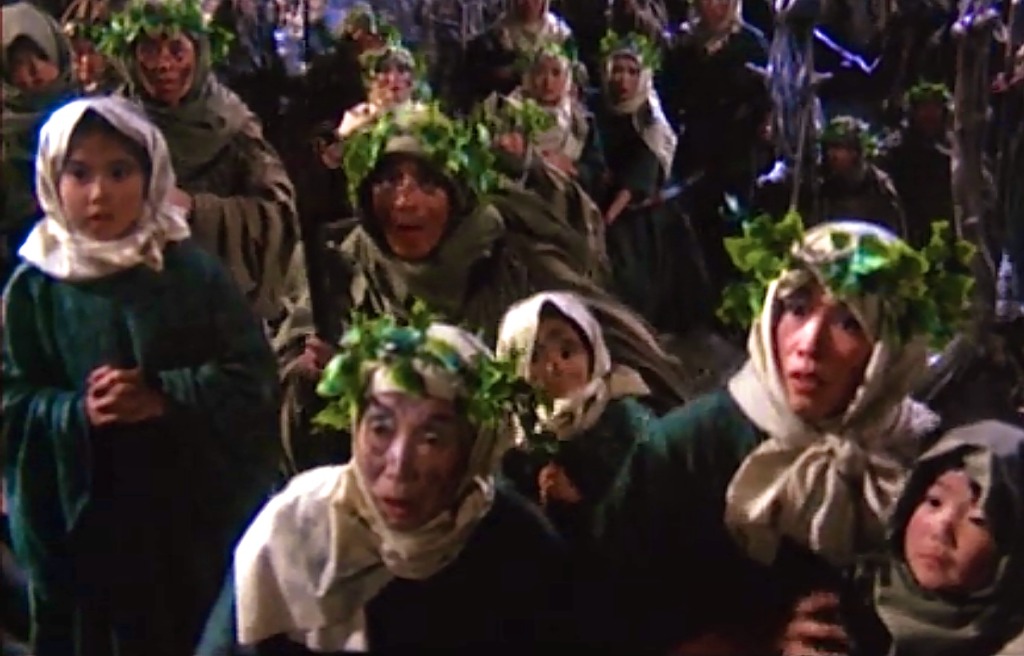 Also, did we really have to see a dude in a football jersey hanging out in the “cantina” scene?

So many questions. Just so you know just how desperately Message tries to copy Star Wars; the “Princess Leia” figure of the film is named Meia. Pronounced “May-yah.” I’m starting to think Buckwheat wrote the script.

Let’s be clear; Message from Space is a real Japanese shit-show. However, the film has a sense of playfulness that the other two shit-shows we’ve discussed (Star Crash, Battle Beyond the Stars) sorely lack. Message looks and feels like a vintage Godzilla movie; the colors are wild and the spaceships look like children’s toys. Message‘s version of the galaxy offers us a gorgeous blue sky, with asteroids hanging lifelessly in the air as spaceships glide by on marionette strings. 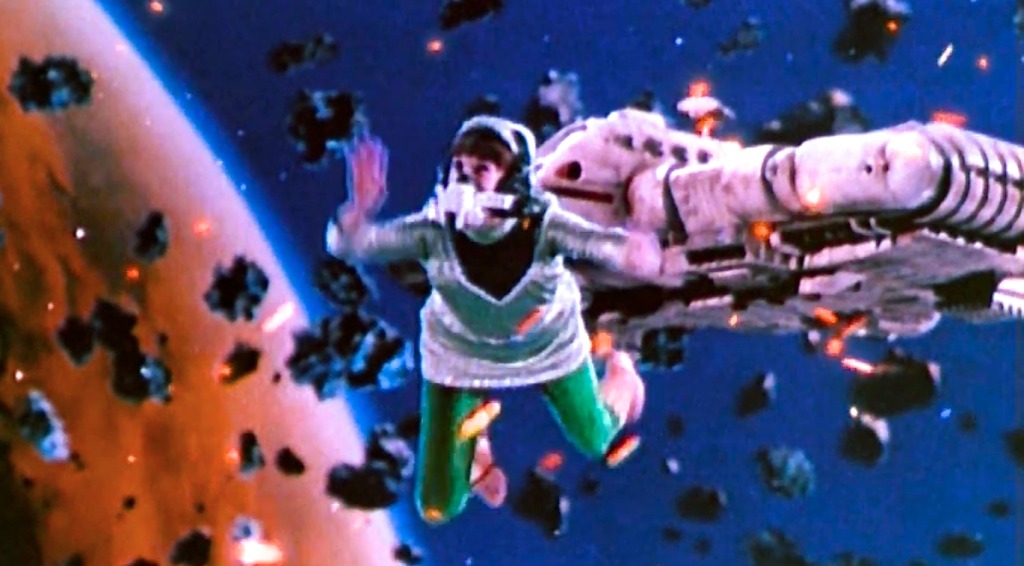 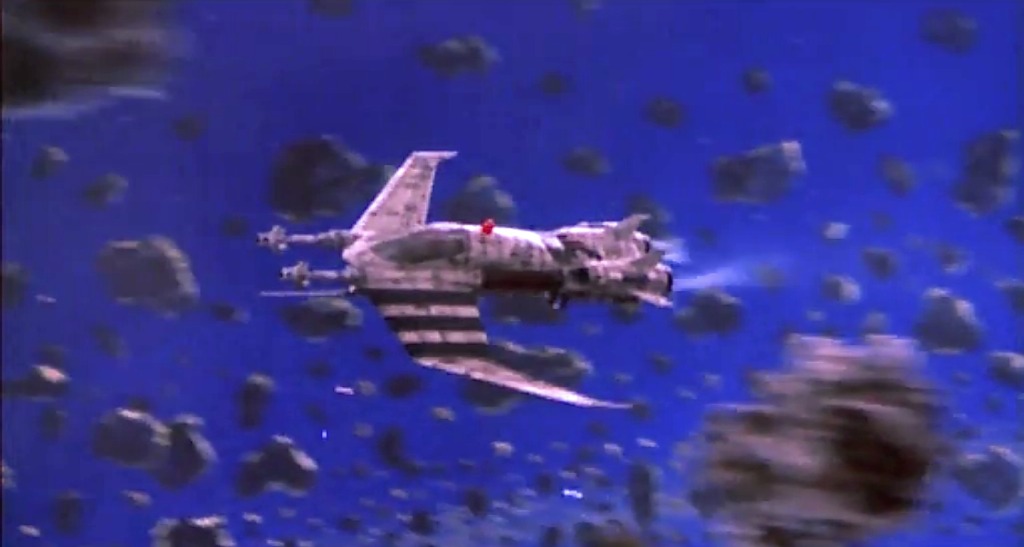 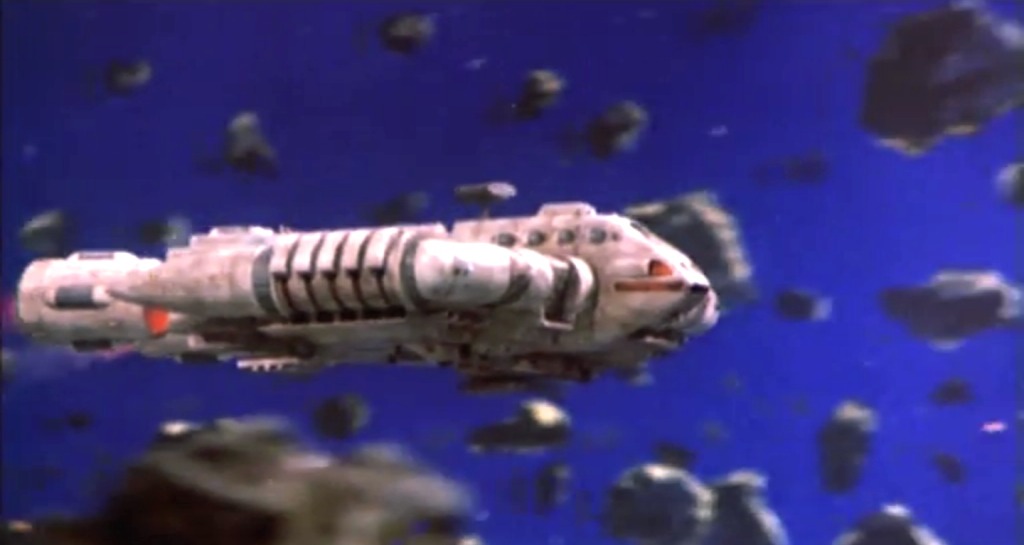 The wild camerawork helps tremendously to create a sense of movement. The actors seem involved in the action as well, as opposed to just sitting in a cramped cockpit and pushing buttons. Dare I say it; Message from Space is directed with more creativity and skill than all the other slow children of Star Wars. Still a shit-show, though.

Morrow was truly great as coach Roy Turner in The Bad News Bears (1976) but unfortunately, that film’s success failed to ignite his career. Personal tragedies and heavy drinking were taking their toll on Morrow at the time Message was shot. His bad luck streak ended when he was killed on the set of Twilight Zone: The Movie (1983). The funniest moments in Messsage are when Morrow addresses his faithful robot pal, Beba 2 (pronounced “bay-buh”). Morrow sounds like an abusive, drunk husband when saying shit like:
“Just one more drink, Bay-buh.”
“Bay-buh, don’t get so emotional on me.”
“Hey Bay-buh, you better shut your voice box!”
A good chunk of Message‘s budget was blown on the bad guys. The villains costumes have one foot in ancient Kabuki theatricality and the other in Power Rangers land. These “evil” fashions are really a wonder to behold. 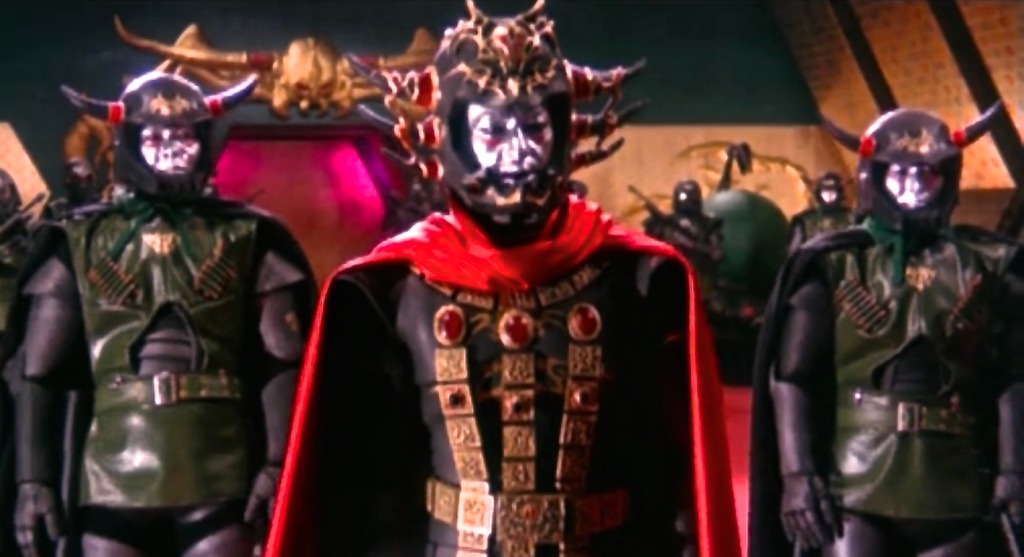 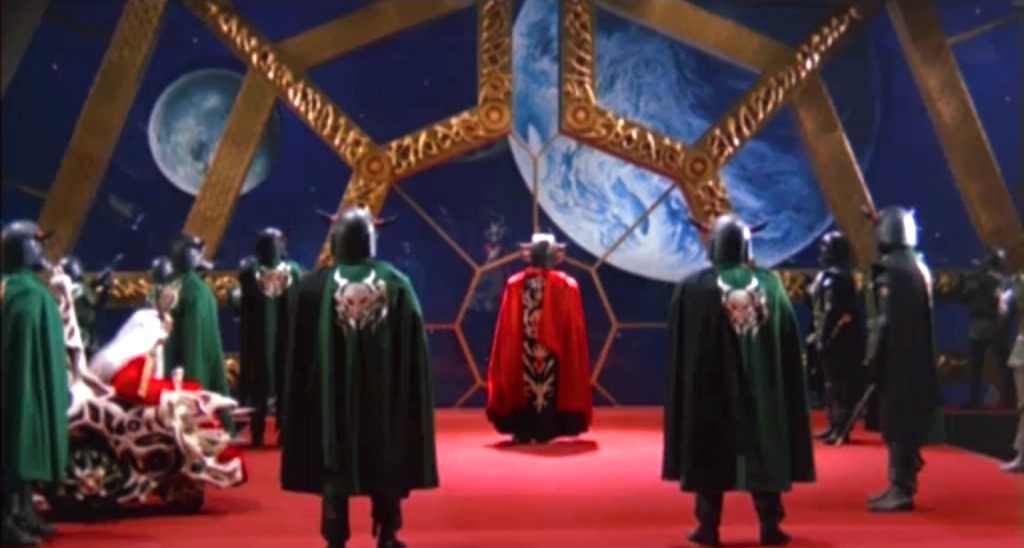 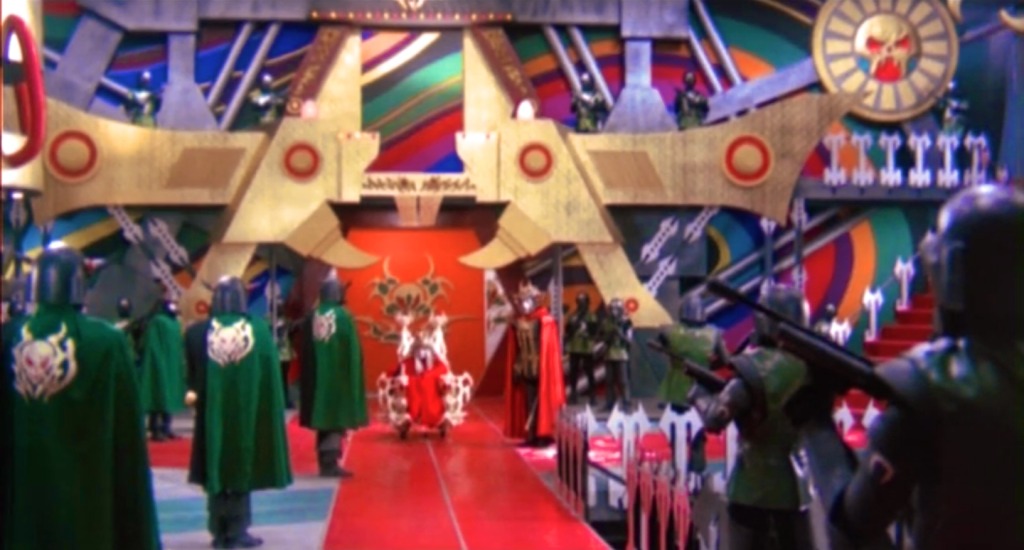 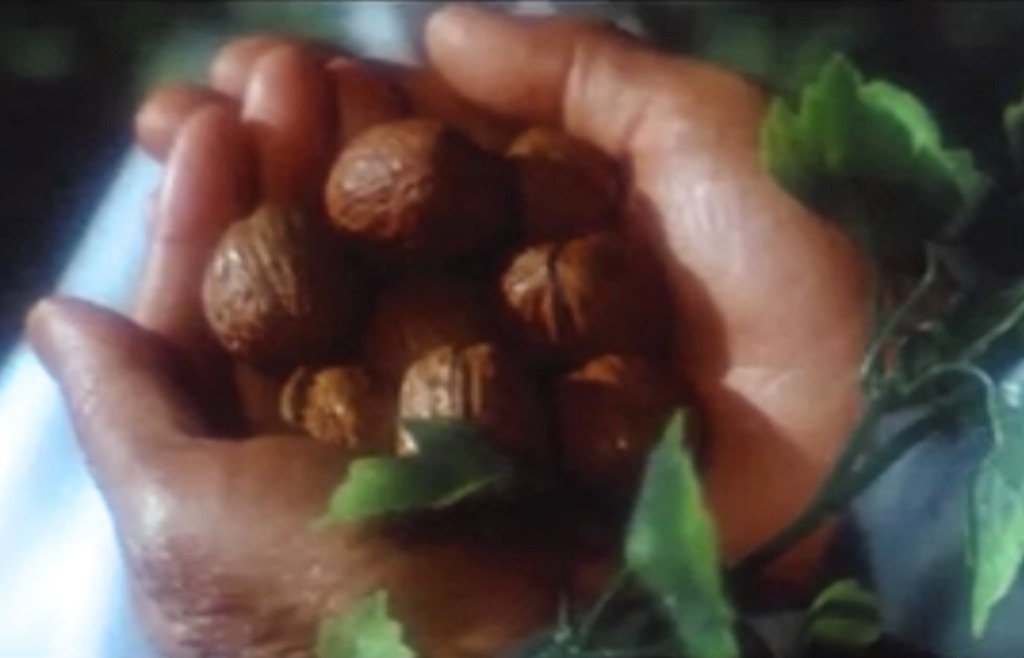 No, that’s not the name of my favorite Captain Beefheart LP, they happen to be a very important part of Message from Space. When the peaceful Jillucian people face imminent destruction at the hands of the evil Gavana clan, the Jillucian king throws eight Magic Space Walnuts into the atmosphere (okay, they’re called Liabe seeds, but they’re really just walnuts). The flying walnuts (sometimes they glow, sometimes they don’t) seek out our future heroes who are destined to save the Jillucian people. I really hate ‘deez nuts. We don’t even get to see them traveling through space and arriving at our heroes’ doorstep; they just “show up.” Vic Morrow finds one in his scotch glass. That’s gross. Another guy finds one in a tomato and yells, “a nut inside a tomato! What’s going on here?” Exactly, dude. By the way, dude, why the hell are you eating a tomato like an apple? That’s disgusting. The walnut in the tomato is also disgusting. I hate this movie. 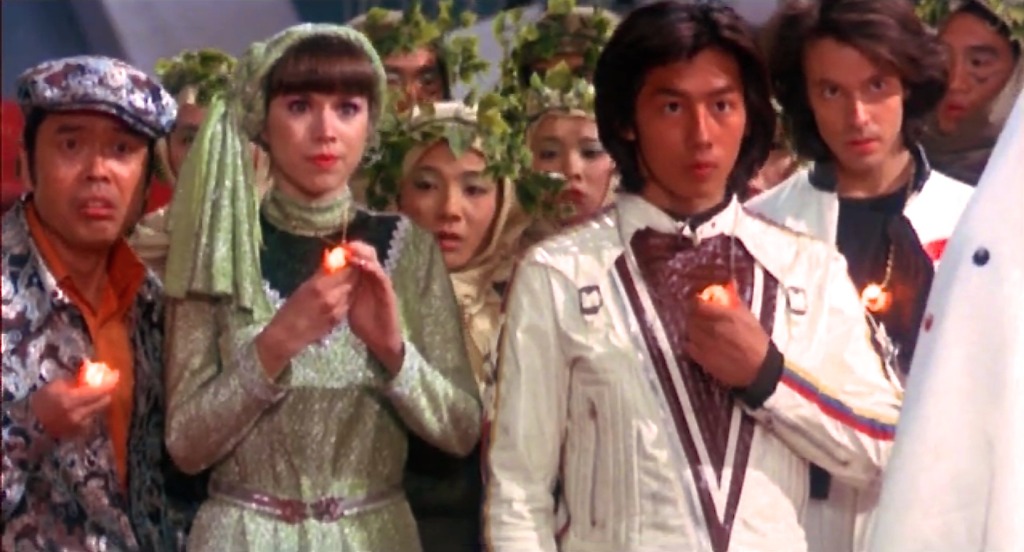