Our Slow Children of Star Wars celebration continues with:

Battle Beyond the Stars was, at the time, the priciest movie Roger Corman had ever made at two million dollars. Whereas Star Crash (1978) wanted to mimic Star Wars but didn’t have the budget to pull it off, Beyond has just the right amount of cash and talent behind it rip Star Wars off the right way. Like many Corman movies, Beyond is more notable for who worked on it than the product itself. John Sayles was hired by Corman to write this “Magnificent Seven in space.” The score was by James Horner, who would go on to score such space adventures as Star Trek II & III and Apollo 13. The special effects and impressive model work was directed by James Cameron, who’s hard work is really evident on screen. Again, compared to Star Crash, Beyond looks pretty damn good; there are even a few fleeting moments that reek of quality. However, Star Wars made its space battles believable; you bought the illusion that the actors were in ships and shooting at each other. Beyond cannot quite nail this illusion. First, there are the shots of actors in claustrophobic cock-pits, toggling toggle switches and pressing non existent buttons. Then there are the shots of spaceships firing at each other. These two components remain separate entities throughout the proceedings. One way in which Beyond strays from the Star Wars template is that in Beyond‘s universe, Earth, and therefore America, actually exists. George Peppard plays the “Cowboy,” a macho U.S. pilot who sports a Confederate flag on his ship, smokes butts and has a scotch & soda maker on his utility belt. It’s clear Peppard is walking through the role without much care, but he manages to drum up some Han Solo-ish swagger. In one scene, Peppard shows our motley crew of alien comrades what an all-American cookout/weenie-roast is like. Everybody gathers ’round the fire while the Cowboy plays some harp and roasts some hot dogs. 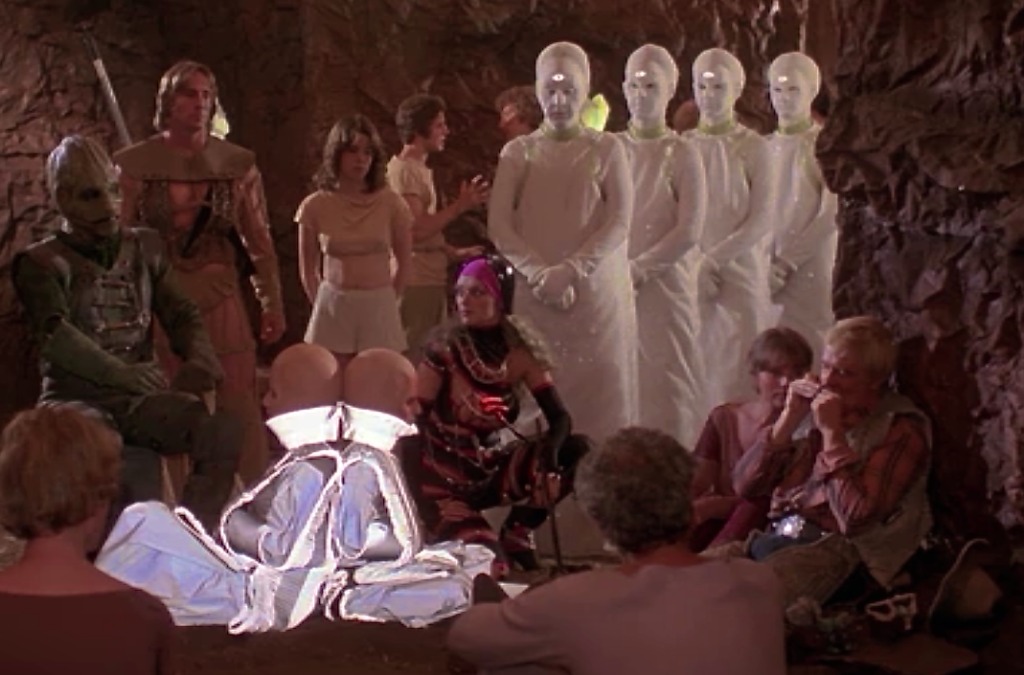 The “fire” in this scenario is a set of alien twins, members of the Kelvin race, who have the power to give off unlimited heat. I think Devo stole the Kelvin’s look for the “Freedom of Choice” video. If I was a Kelvin, I’d be really pissed at having weiners shoved in my face all night. Talk about American insensitivity. Vaughn, who’s actually in The Magnificent Seven (1960), pretty much does an encore of that role for Beyond. We first meet Vaughn’s glum space assassin, Gelt (a Yiddish slang term for money), sitting on his throne, looking like a gay Captain Kirk, surrounded by the spoils of his exploits. I found it strange that Gelt’s gelt is stored in old-fashioned, pirate-y treasure chests. I suppose that whether you be sea pirate or a space pirate, you’re only allowed to steal valuables in the form of cumbersome chests filled with pearl necklaces and knick knacks. The only time Vaughn changes his bummed out look is when he’s about to die. I captured the moment for you. Your welcome. Beyond has twice as many female leads as Star Wars; two, to be exact, and deserves some credit for having two ladies fighting along side the boys. Alas, the lady heroes are portrayed by the two worst actresses in the galaxy. Darlanne Fleugel plays Richard Thomas’ space girlfriend but that’s quite enough about Darlanne Fleugel. As St. Exmin, a proud member of the Valkyrie clan, B-movie sexpot, Sybil Danning is forced to walk around looking like she’s late for a parade in Rio. But hey, at least she’s given story arch. Danning ignites the screen with a fierce, Amazonian stiffness. She looks like she could crush Thomas’ fey boy-pilot’s head with just her tits. It’s a little strange though, that the filmmakers made Danning recline so far back while piloting her ship- it’s almost as if the director is inviting we, the audience, to mount her. One could say the the third female lead in Beyond is Nell, the voice of the computer on Thomas’ ship. Nell is the She-Hal 9000, or rather, the “Obe-Wan”-type mentor to Thomas. Nell sounds like a doctors office receptionist and lives in a psychedelic lamp thingy that Greg Brady would have proudly displayed in his chill room. There’s no doubt; Nell’s ship runs on estrogen. Just check out her giant mammary turrets! 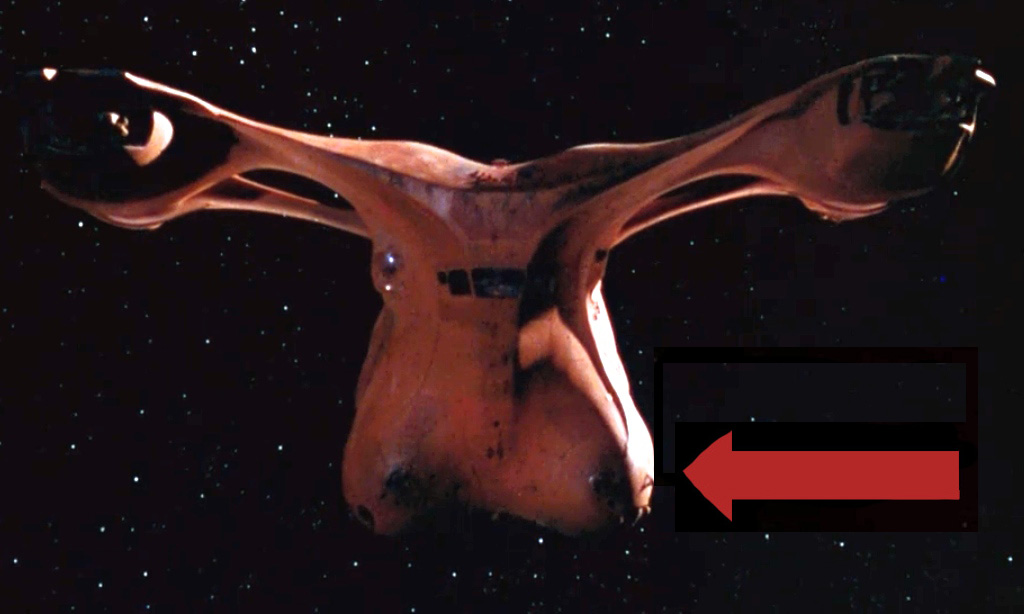 Lastly, I didn’t like the way Richard Thomas’ mole (not pictured- you’re welcome again) made me feel. His cheek blemish turned me into a superficial and petty person- a bully, even. Let me just say I’m glad that someone with such a large thing on his face was able to get steady work. Thomas has been working on Broadway for quite some time and when I discovered this I was relieved. Maybe his talents are better experienced from the kind of distance only a Broadway venue can provide. I am ready for your condemnation, internet. Don’t I get points for honesty?

Next Week: More sci-fi madness with Message From Space